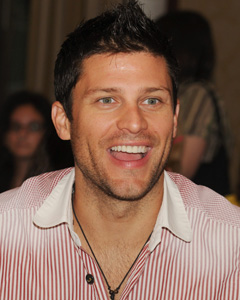 (SoapOperaNetwork.com) — The rarely seen Greg Vaughan (Lucky Spencer) of ABC’s “General Hospital” addresses rumors of his being dropped to recurring status by the soap and his desire to hear what his fan’s think should happen on the drama series.

On Wednesday, July 8, Vaughan took to his Twitter page in order to squash those pesky rumors that he’s been hearing for the last couple of months. Though he spoke in third person.

“Now we’re seeing rumors that Lucky may be heading out of Port Charles. Is this to help his ‘brother’ Ethan [Nathan Parsons] find their wayward father Luke?”

Anthony Geary, who portrays Luke Spencer on “GH,” recently went on vacation and according to “rumors,” Luke is being held captive somewhere outside of Port Charles and his kids will work together to try and rescue him. It was revealed in late May/early June that Luke was also the father of Ethan via a rewritten rendezvous with Holly (Emma Samms).

Despite Vaughan’s initial tweeting in third person, he eventually made it clear that his job is secure with the soap.

“I have not been put on recurring status!!! But, it feels like it!”

If you are a fan of Vaughan or his character Lucky Spencer, the actor wants to hear from you on what you want to see happen on “GH” and with his character.

“Please! Speak your mind! It’s your privelege as dedicated fans, right? Let me hear your voice, and what you would like to see happen,” Vaughan said to his fans.