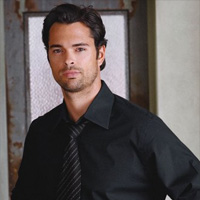 (SoapOperaNetwork.com) — After two short-term gigs on ABC and NBC soaps, will CBS’ “The Young and the Restless” give Steve Richard Harris the chance to break into daytime once and for all?

Steve Richard Harris made his debut on the soap earlier this year as a bartender at the Genoa City Athletic Club when his then unknown character bed Cougar Jill Abbott (Jess Walton). Now the actor speaks out on how life’s changed since his days on “Another World” and “One Life to Live.”

In a recent interview with Soaps.com, Harris reveals that his character now has a name – Aidan – and will pop back into Genoa City in scenes with Judith Chapmen (Gloria) and Ted Shackelford (Jeffrey).

Prior to landing a gig on “Y&R,” Harris had a contract role on NBC’s “Another World” (1998-1999) as Zak Wilder and ABC’s “One Life to Live” (2002-2003) as Seth Anderson. He has also appeared in such shows as HBO’s “Sex and the City” and CBS’ “Criminal Minds.” He also wrote, directed and acted in the 18-minute short film “Signal Lost.” The film was recently entered into the L.A. Short Film Festival.

Look for Harris on “The Young and the Restless” on Tuesday, July 14 and Wednesday, July 15. With any luck, the actor will make more appearances on the soap. Stay tuned!