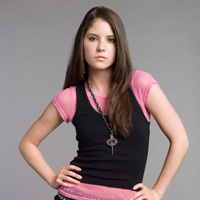 “Hair of the Dogged”

Gigi realizes she can’t expose Stacy’s lies until she discovers who Shane’s bone marrow donor really is.  Gigi plans on cozying up to Kyle after Schuyler tells her he believes Kyle might know more than he’s saying.  A manipulative Stacy reminds Rex that Gigi has clearly moved on.  Rex sneaks him and Stacy into the country club and can’t help but be affected by the sight of her in a bikini.

Blair’s arrival forces Todd to reveal the truth about his new living arrangement to Téa.

Markko stands up to his father, who forbids him to see Langston while living under his roof.  Markko vows to come up with the money to move out of his parent’s house.  Langston demands that Dorian make things right with Markko’s parents.

Layla picks up on the tension between Kyle and Fish.  Layla agrees to go out on a date with Fish.