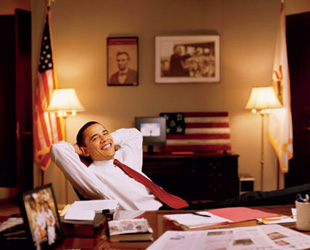 (SoapOperaNetwork.com) — Out with the old, in with the news. When Barack Obama takes the oath of office on January 20th, 2009 and becomes our nation’s first African American President, the cable news outlets and broadcast networks will provide wall-to-wall coverage of the landmark event. As history is made in the United States, the eight daytime dramas will take a back seat to politics. It happens once every four years, and only 55 times in American history. And on January 20th, 2009, it will happen for the first time since 2005. The United States of America will transfer power from one Presidential administration to the next. And on his way to White House to begin the job of running the country, President-Elect Barack Obama will travel by train from Philadelphia to Washington, D.C., where he will be sworn in as the 44th President on the steps of the U.S. Capitol building, echoing the journey President Abraham Lincoln made nearly a century and a half ago. In addition, Obama will be sworn in using the same Bible Lincoln used when he first took the oath of office in 1861. Although the swearing in ceremony will not take place until noon est, numerous events have been scheduled throughout the day and into the evening, concluding with ten ceremonial Inaugural Balls. Following the oath of office, President Barack Obama and Vice President Joe Biden will make the traditional journey down Pennsylvania Avenue as part of the annual Inauguration Day Parade. Television coverage of the 56th U.S. Presidential Inauguration, themed “A New Birth of Freedom,” will result in the pre-emption of local newscasts and all regularly scheduled daytime programming on the four major broadcast networks (ABC, CBS, NBC, and FOX) on Tuesday, January 20th. However, soap fans needn’t worry. All soaps will return on Wednesday, January 21st and no episodes will be missed.
Scotty Gore