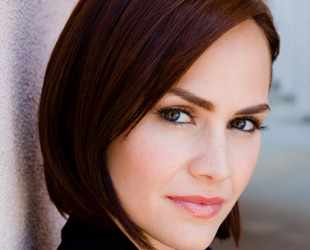 (SoapOperaNetwork.com) — “She goes against the grain. With her, if I don’t feel like smiling, I don’t have to.”

In the exclusive interview, the actress discusses her new role on “GH” and how different the character is from Emily Bowen-Quartermaine, a role she portrayed on the ABC soap from April 2003 through May 2008. Emily was killed off in November 2007, and resurrected as a ghost, or a tumor, until Livingston’s departure.

“Her name is Rebecca and she works at the hospital,” Livingston admitted. “She’s going to come in and shake things up. It’ll be interesting to see how the characters react to her.”

Livingston made it clear that unlike Emily, “Rebecca doesn’t feel the need to be nice to everyone.”

For the full interview head on over to the Peach Buzz.

Look for Natalia Livingston to mark her “GH” return on Thursday, January 15 as the soap gears up for its upcoming “Twist in Time” story arc.