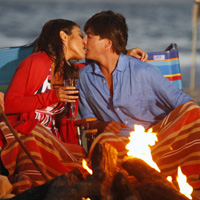 (SoapOperaNetwork.com) — Secrets are hard to keep.

After asking the woman he loves and the mother of his “unborn” child to marry him at the beginning of the New Year, would EJ really want her to find out what he’s been up to soon afterward? Nicole finds pre-nuptial agreement paperwork that suddenly falls out of EJ’s briefcase. Care to explain Mr. Wells?

Hope works her magic on Bo and convinces him to take a romantic break with her. It will be well worth it Brady. Lexie and Abe learn that Theo must undergo surgery in order to relieve pressure on his brain. Max offers himself as Chelsea’s date to the engagement party.

A Closer Look: Lucas the Protector
It’s bad enough that Daniel is with his mother, but does he have to sniff around Chloe too? Lucas is about to find out as the two duke it out. Of course, Lucas throws the first punch on Thursday, January 8. Kate tells Daniel that she thinks they should take a break from their relationship.

Days of our Lives News and Headlines