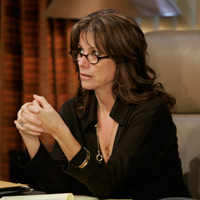 (SoapOperaNetwork.com) — After two straight weeks of repeats and interruptions, “General Hospital” is back in full swing with lots of drama heading your way.

Jax and Carly come to a mutual understanding. Nadine makes it clear that she wants nothing to do with Equinox and its dealings with manufactured weapons. In honor of Ruby’s memory, Luke and Bobbie discuss rebuilding Kelly’s. Sam is unsettled when she witnesses how close Lucky and Elizabeth are getting. Robin feels the stress of motherhood. Patrick informs Sonny that Michael’s condition could be permanent. Sonny and Carly come to an understanding and work on re-building their relationship. Diane suggests that Alexis and she work on bringing Jax and Carly back together, instead of tearing them apart through a divorce. Johnny is arrested, and Ric offers help from Anthony. A surprising individual bails Johnny out.

The Inside Story: Claudia and Her DVD’s
Claudia has her hands on the latest Jerry Jacks DVD, but unfortunately for her Sonny is too close for comfort. Claudia tries to distract Sonny and hide the DVD before he grows suspicious on Monday, January 5. Carly catches Claudia in the act.  Carly gives Claudia a stern warning. Claudia is surprised by Sonny’s generosity and latest actions. Johnny learns of what Jerry’s been up to in the afterlife. Lulu grows suspicious of Johnny and Claudia.

A Closer Look: When Spinelli Met Winifred
On Friday, January 2, Spinelli met Winifred (played by Senta Moses), his “female counterpart.” On Monday, January 5, Maxie grows suspicious of Winifred, but is quickly calmed down by Spinelli’s words. Unfortunately, being the Maxie we all know and love, that won’t stop her from snooping. Winifred threatens Maxie, while Spinelli can’t side with Maxie this time. Thinking she is saving him, Maxie goes to great lengths (think bedroom) in changing his mind.