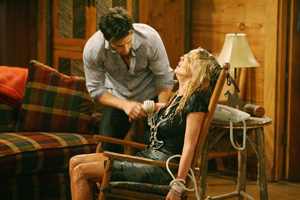 (SoapOperaNetwork.com) — Be my savior.

THE BOLD AND THE BEAUTIFUL

After discussing theories and motives, Lt. and Det. Baker’s work to get to the bottom of Eric’s attempted murder and make an arrest. After getting a chilling visit from Stephanie in jail, Owen begs Ridge to believe his story. Ann calls Stephanie and delivers some troublesome news. Nick and Katie come to an emotional decision about their baby.

The Inside Story: Owen to the Rescue

A terrified Donna tries to fight off a masked intruder. A tied up and honey basted Donna is moments from death when she discovers that Pamela has opened the doors for a bear to eat her alive. Owen, Marcus, Brooke and Ridge rush to Big Bear, but can they make it in time to save Donna? Tune in on Friday, August 29 to find out!