Krystal narrowly escapes tragedy after Kathy deliberately pushes her off a ladder and sends her flying towards Jenny’s playpen. Tad buys Kathy’s innocent act. Krystal insists to Tad that Kathy needs professional help. Jesse gets confirmation that the blood on the lug wrench he recovered belongs to Richie. Kendall is annoyed when Zach is a no show at the Bella launch party. After enduring watching Jack and Carmen together all evening long, Erica makes sure to get the last word in before making an exit. Josh turns to Kendall for help. Randi confesses to Frankie that she’s never been truly intimate with anyone. Jesse reveals to Angie that during his time in hiding he was institutionalized for over a year after having suffered a nervous breakdown. Zach is out for Josh’s blood after putting together that he embezzled the twenty million from the casinos. Taylor opens up and tells Jake about the horrific event in Iraq that took the life of her fiancé.

A Closer Look: Love on the Rocks

Erica finds a troubled Ryan at the beach. Annie moves into the mansion at an oblivious Babe’s invitation. Ryan and Annie face the painful task of telling Emma that they’ve separated. Annie gives Ryan the cold shoulder when he shows up at the Bella launch party. Ryan later accuses Annie of not taking care of herself and the baby when he learns that Jake had ordered her to bed rest. Annie warns Aidan to keep Greenlee away from Ryan. Annie and Aidan find their ex’s on the Fusion rooftop. An indignant Greenlee refuses to abide by Aidan’s demand that she stay away from Ryan. Annie calls Ryan after getting an earful from Adam.

The Inside Story: The Schemers 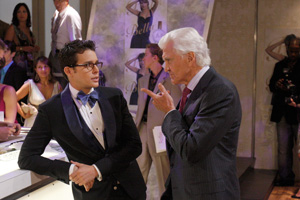 Babe, Amanda and Randi prepare for the press conference announcing the launch of Bella. Amanda insists that she’ll be the face of their new fragrance. True to his part of the deal with the young Mr. Cortlandt, Adam pushes his daughter towards Pete. Adam taints one of the bottles of Bella with Pete’s recipe before heading to the launch party. Colby insists on trying out the tainted bottle of perfume much to Adam’s horror. JR and Babe assume Colby is drunk as she suffers the side effects of spraying on the perfume but Adam and Pete know better. Kendall gives Amanda some advice. An overtly confident Adam shares his master plan to ruin Fusion with Pete on Thursday, September 4.