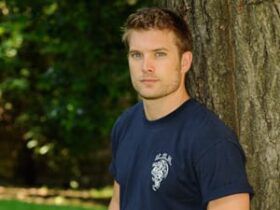 What’s a girl to do?

(SoapOperaNetwork.com) — Why must I be a teenager in love?

Ramsey threatens Nora by telling her that her job is on the line. John and Ramsey reach a stalemate. Nora tells a stunned Antonio, Cristian, and Carlotta that victims of the Santi family are suing for restitution, meaning Antonio will lose everything, including Capricorn and Jamie’s trust fund. John and Nora team up to figure out how Ramsey got his job. Cristian informs Jessica of Antonio’s turn
of bad luck. Jessica asks Cristian to design a new wine label. Ramsey arranges a meeting with Dorian, and sends John and Antonio to cover a minor crime. John, Talia, and Antonio work to understand why Ramsey had them deal with small time crooks. Ramsey begins digging into Antonio’s past. Later Antonio sees a different side of Ramsey. Nash is curious as to Jessica’s reasons for wanting to hire Cristian, and meets again with his mysterious new business partner. Jessica and Antonio share a bittersweet moment.

Dorian taunts Viki at the Palace. Jessica alerts Charlie to the true nature of Viki and Dorian’s “friendship.” Arriving at the Palace to confront Dorian, Charlie is curious as to what’s in it for her. Dorian, meanwhile, fires back and confesses to wanting to hurt Viki by keeping Jared’s secret until it will cause the most damage. Charlie wants to wash his hands of Dorian, who reminds him
that she holds all the cards. Charlie if forced to do Dorian’s bidding as she schemes to stop Adriana from marrying Rex. Natalie can see the chemistry between Rex and Gigi. Jared and Charlie join forces to beat Dorian at her own game by taping her conversation with Charlie. Jared confesses his guilt to Nigel, and is unaware their conversation is being recorded. Natalie nearly overhears Jared’s confession. Roxy wonders what Charlie’s real motives are. Viki senses that there is something going on between Rex and Gigi. After stumbling upon photos of Rex and his mother, Gigi stops Shane in his tracks when he asks if there are any pictures of his father.

Starr is distraught over her lack of contact with the outside world, and begs Dorian to help her. Although sorry for her niece’s predicament, Dorian sides with Todd. Blair flat out refuses to allow Todd to move the family to Hawaii. Starr’s joy of remaining in Llanview is short lived when Todd warns her that if Cole doesn’t keep his distance, he will have him arrested for shooting Miles. John manages to stop Cole from making matters worse. Starr realizes Todd is serious, and bruises her father’s ego by telling him that she now sees why people are afraid of him. Blair’s words fall on deaf ears as Todd is determined to file assault charges against John. However, Todd comes to his senses after Nora reminds
him that getting John fired from the LPD would play right into Ramsey’s hands. Blair tells Starr that she believes Todd would actually make good on his threat. Todd hires bodyguards to follow Starr. Langston and Markko devise a plan for Starr and Cole to meet at the docks. Blair urges Starr to let Cole go if she truly loves him. Heartbroken, Starr breaks up with Cole in order to protect him from Todd’s wrath.

– Marcie picks up Shane from school and drops him off at Llanfair.

– Marcie receives kind words from the mother of a former student, as well as from Viki.

– Lindsay put her scheme in motion by cozying up to Walter.

– Natalie and Jared question Renee and Nigel about potential BE adversaries.

Monday: John sees red when Antonio refuses to stand up to Ramsey; Gigi comes clean to Rex about Shane; Jared works to gain possession of the tape.

Tuesday: Starr is out for revenge against her father; Jared worries that Natalie has uncovered the truth; Blair has a business offer for Cristian.

Friday: Jared and Charlie continue to bond; Adriana learns of her mother’s dealings; Langston and Markko work to keep Starr and Cole together.