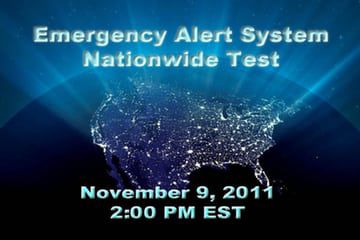 As we first reported back in June, this afternoon (Wednesday, November 9), the Federal Communications Commission (FCC), the Federal Emergency Management Agency (FEMA), and the National Oceanic and Atmospheric Association (NOAA), will be conducting their first ever nationwide test of the Emergency Alert System at about 2:00pm ET. During the test, all regularly scheduled programming on television, cable, satellite, and radio will be pre-empted. However, while the test was originally scheduled to last as long as three and one half minutes, it should now last only about thirty seconds. That is good news for soap fans, especially for those of "One Life to Live," who have seen their soap interrupted countless times over the years for breaking news and weather coverage by both ABC and their local affiliates.