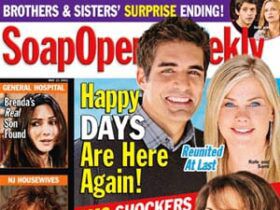 While "All My Children" and "One Life to Live" were receiving worldwide attention after it was announced that ABC had decided be cancel both series on the afternoon of what is now known as Black Thursday (April 14), magazine publisher Source Interlink quietly made noise of its own that very morning when it announced it would be laying off more than half of its employees working on popular magazines Soap Opera Digest and Soap Opera Weekly. Now comes word that the company, which handed over editorial, advertising, marketing and distribution control of the magazine's to American Media, which runs such rags as The National Enquirer, has officially laid off the affected individuals.