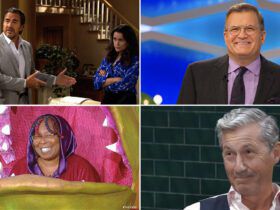 On Tuesday, November 9, Jerry Douglas, a more than 30-year veteran cast member of CBS’ “The Young and the Restless,” joining the series in March 1982 as Abbott patriarch John Abbott, died after a brief illness. The 88-year-old would have celebrated his 89th birthday on Friday, November 12.

Douglas portrayed the wealthy chairman of Jabot Cosmetics and beloved single father who helped his children navigate adulthood until the character’s death in 2006. The actor would continue appearing on the soap as a ghost of the character over the years with his most recent appearance being in 2016.

“On behalf of the entire company of ‘The Young and the Restless,’ we send our deepest sympathies to the Douglas family on the passing of Jerry Douglas,” said Anthony Morina, the show’s executive producer. “Jerry came to ‘Y&R’ in 1982 with an impressive resume of credits. Our show was lucky to have an actor of his caliber join the ‘Y&R’ cast and introduce the audience to the iconic Abbott family. His contribution to the legacy of ‘Y&R’ as Abbott family patriarch, John Abbott is still felt to this day. He will be sorely missed.”

Born in Chelsea, Massachusetts, Douglas graduated with a Bachelor of Science degree in Economics from Brandeis University where he played quarterback for the school’s team on a football scholarship. Upon graduation, Douglas launched his acting career and quickly adapted into the entertainment world as both a screenwriter and a playwright, developing projects with Josh O’Connell through their production company, O’Connell/Douglas Productions.

Throughout his storied career, Douglas appeared in more than one hundred productions, including the feature films “JFK,” “Avalanche,” “The Godson,” “Head Over Spurs in Love,” and “Mommie Dearest.”

He had guest-starring roles on such shows as “Cold Case,” “Melrose Place,” “The Christmas Wish,” “Crash” and “Arrested Development.” Further back, he appeared in episodes of “The Rockford Files,” “Police Story, Hunter,” “The Streets of San Francisco,” “Mannix,” “Barnaby Jones,” “Police Woman,” “The Rookies” and “Mission Impossible,” among many others.

Beyond acting, Douglas’ versatility includes work in theater and singing performances across the United States and Canada. His album “The Best Is Yet To Come” is currently available on audio streaming platforms.