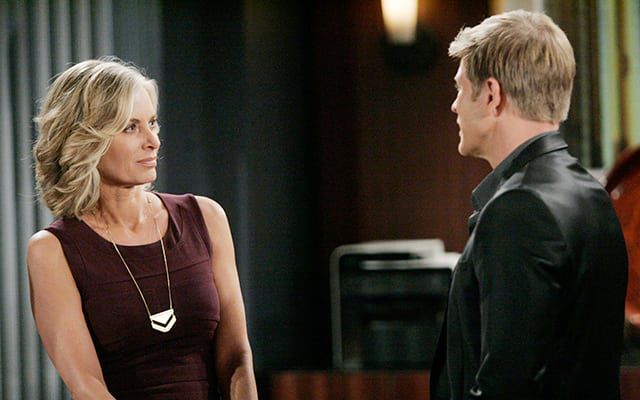 Get Ready For the September Casting Blitz At ‘Y&R!’

While fans will get a chance to see Eileen Davidson back on screen as Ashley Abbott on Friday, March 29 and Monday, April 1 on “The Young and the Restless,” the actress has confirmed that she’ll also be back for the Kristoff St. John on-air tribute, airing Monday, April 29 on CBS.

In an interview with Soap Opera Digest, Davidson says, “When I was initially contacted by ‘Y&R’ it was only supposed to be for a quick visit, but after Kristoff St. John’s passing, the show asked if I would participate in their plans to honor both Neil and Kristoff.” She added, “Luckily, I was available, and I am honored to be included in those shows.”

The tribute to Kristoff’s character, Neil Winters, kicks off Tuesday, April 23 with a storyline in which the character’s friends, family and colleagues learn of his sudden passing. Shemar Moore is set to reprise his role as Neil’s brother, Malcolm, on Thursday, April 25 and Friday, April 26. Davidson will appear in episodes sometime during that period.

In addition to Davidson appearing in the Kristoff tribute, actresses Mishael Morgan (ex-Hilary Curtis Winters), Victoria Rowell (ex-Drucilla Winters), Christel Khalil and Jess Walton are also scheduled to appear. In the case of Khalil and Walton, they will share in the emotion along with the rest of Genoa City as they mourn the loss of their loved one as their characters Lily Winters and Jill Foster Abbott, respectively. Morgan and Rowell will only appear in the tribute for St. John.