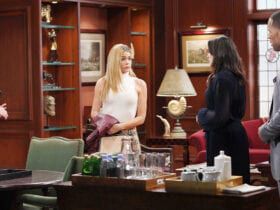 Despite signing a four-year contract with the soap last summer, Rebecca Budig is out as “General Hospital’s” Hayden Barnes.

While ABC is not commenting, except to say they do not comment on actor contracts, it’s understood that before the soap goes dark for an expected three-week summer hiatus next week, Budig will finish her stint later this week as she tapes her final scenes. A final airdate has not been set.

Joining “GH” in May 2015, in what was supposed to be a limited run, Budig was upped to contract status with the soap last summer.

Budig is best known for her run on “All My Children,” where she played the conniving Greenlee Smythe off-and-on from August 1999 through the soap’s final episode on ABC in September 2011. Prior to “AMC,” Budig portrayed Michelle Bauer on “Guiding Light” (1995-1998).

In between soap stints, Budig has appeared in episodes of “Hope & Faith,” “CSI: Crime Scene Investigation,” “How I Met Your Mother,” “Castle” and “Blue Bloods,” among others. Budig was a contestant on ABC’s “Skating with the Stars,” a winter 2010 competition series that tested celebrities and their skating skills. Budig eventually won the competition at its conclusion.