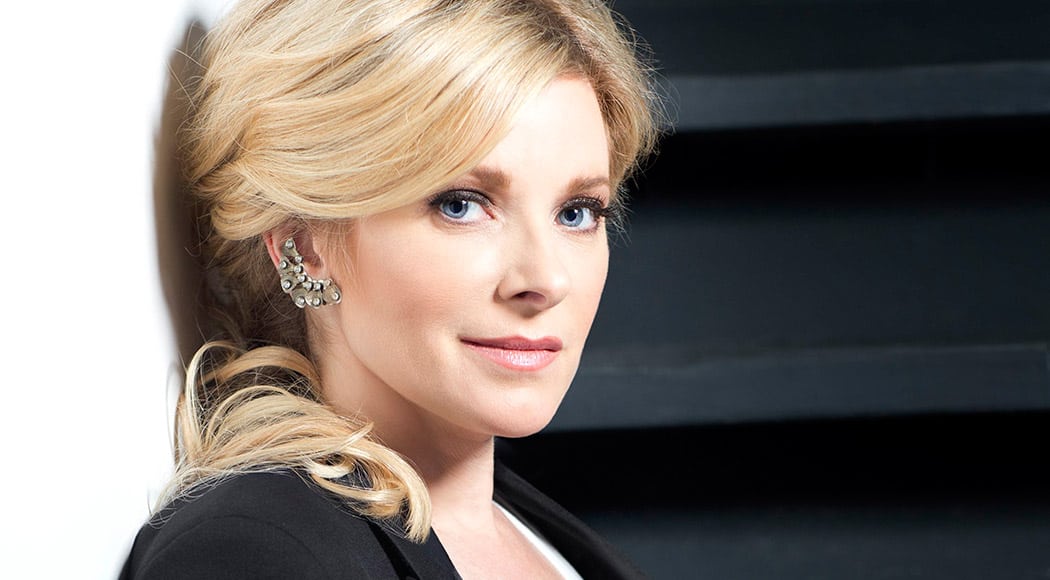 Since joining the cast of CBS’ “The Young and the Restless” in early 2014, Cady McClain [ex-Dixie Martin, “All My Children”; ex-Rosanna Cabot, “As The World Turns”] has seen her character, Kelly Andrews, finally deal with several family matters that have helped shape her into who she is today. “Her child died, her marriage broke up, her mom was a drunk and was very unstable. She thought her father was good, and it turns out her father was abusive. So Kelly had a really rough life experience. I hope that the fans kind of remember that. She’s really hanging on by her fingernails and trying to make this life, and Jack is a real key… falling in love,” McClain says in an exclusive interview with Soap Opera Network, following the Tuesday, February 17 episode of “Y&R,” which found Jack Abbott’s (Peter Bergman) actions contradict his words when he once again became intimate with Kelly as they did the deed in the storage room of The Underground.

The result of which seemingly gave hope of a future to a woman who many have begun to question her mental state. McClain also reveals in our interview some things you may not even realize about Kelly, the difference from being a recurring actor on a soap vs. a contract player, if any, and what’s next for one of Genoa City’s most exciting triangles.

When we tweeted, “Poor Kelly or crazy Kelly? Things are getting very interesting for Ms. Andrews,” shortly before the conclusion of Tuesday’s episode, some of you sided with the crazy side of the character. McClain doesn’t agree. “Poor Kelly! [laughs]. Poor Kelly. She loves Jack and now he’s being weird and just using her. She doesn’t know. She thinks it was very confusing to her what just happened,” says McClain, who had just completed an eventful live tweet during that day’s broadcast. But she does think collectively Jack, Kelly and Phyllis (Gina Tognoni) “all have to be crazy to be together [jokes] and people putting up with all of this, or each other.”

While the triangle is currently where Kelly’s concentration stands, it hasn’t cost Kelly anything storywise. Although there may be some story points she would have liked to have played, nothing really has been missed since the introduction of the character in 2013. “I honestly think they’ve done an amazing job of filling in the backstory with her mom. Remembering all that with Meredith Baxter and the murder of her father that turned out to not be by Stitch [Sean Carrigan], and to be by the mom. I suppose it would have been fun to have done more. I didn’t get to act with Meredith Baxter as much as I wanted to. I would have loved to have had some mother/daughter scenes. If Meredith ever wants to come back to the show, I’m sure they would embrace that. I know I would. ‘Come back. Bring back mom,'” exclaims McClain. “I think they’ve really covered all their bases with her pretty well. Family is really where it’s all at. Those family connections and I’m very lucky that I get to work with Sean Carrigan. He’s just so good. I just love our scenes together as a brother/sister. It just lends that other element of history and that’s what’s really important, I think, for the fans too. The fans have this sense of the history of where that character’s come from.” And that includes her love for Mr. Abbott.

“He really courted her with the roses. They were in love. They seemed very, very real. Phyllis coming in just sort of really threw a big ol’ wrench into all of that. It’s really pushed Kelly to the edge. That doesn’t make her crazy, it just makes her willing to do things that maybe she would think about twice if her life was more stable.”

As for those scenes where Jack took Kelly into his arms, and took her to heaven so to speak, one has to wonder if Jack has finally reached his breaking point after dealing with the loves of his life. “I don’t think that Jack has had a mental break. Didn’t he used to be called Smiling Jack back in the day? Wasn’t he like a cad, the bad boy?” McClain recalls of of Mr. Abbott’s early beginnings. “I think it asks the question, ‘Do people really change as much as you think they do?’ I mean, has Jack really changed that much? Did something push him over the edge? Did Phyllis make him want to go back to his old self. Did Kelly make him want to go back to his old self? I mean, I don’t know. I honestly don’t know. Peter and I were talking about the scene… we played it as written. That’s what we do, read what we get and we play that and just go for it. That was our plan. It was just, ‘Okay, let’s go for it!’ Clearly Jack and Kelly enjoy sex together. That’s one thing they had in common.”

After the deed was done there was a moment where Jack and Kelly were getting redressed. If you looked closely you would have noticed Kelly pull up her underwear. That wasn’t a scripted moment. “Who has sex with their underwear on? That’s pretty difficult. I was like, ‘I want to make it look real.’ When you stand up, you kind of like have to pretend like you’re getting them back on… I think everybody really tries to keep that reality in there because the viewers don’t miss a beat. That was certainly my goal and Peter and I talked about that too. He puts his pants on. He puts his shirt on. That’s what people do!”

Outside of her own storyline, viewers are truly enthralled with “Y&R’s” FANtastic February umbrella storyline, “Flirt with Disaster,” which includes the aforementioned Underground collapse, a plane crash that has stranded several characters, an apartment building fire that’s found enemies working together to save each other’s lives, and a murder mystery that has left many rootable characters wondering which one of them could pull off the unthinkable. “I think the credit really goes to [executive producer] Jill Farren Phelps and [head writer] Chuck Pratt. They are the ones that really engineered this whole ‘Flirting with Disaster’/’Fantastic February.’ This kind of style, and that’s great to hear that [viewers] are digging that,” notes McClain of the February Sweeps storyline that kicked off on Friday, February 13.

Back to Kelly: Where is she headed now that Jack seems to have shown he might still care about her? “I definitely see Kelly… this is a big connection with her. This moment that she and Jack make love again after him telling her, ‘I don’t want anything to do with you!’ I think she’s not going to give up on Jack. This was the moment she’s been waiting for. Like proof that he still wants her,” explains McClain. “I think she’s going to pursue that as much as she can, to make that happen because she really loves Jack. Jack is everything to her. Now she’s got proof that he loves her too, or [at least] she thinks he loves her. He certainly wanted her there.”

Speaking of stability, McClain is on recurring status with “Y&R.” You probably wouldn’t notice based on storyline. That’s okay though. “You know, I’m very happy as a recurring player. It certainly gives me some flexibility. On ‘As The World Turns’ too, I was a recurring player and I worked like a contract player. These days it’s so weird. It just doesn’t seem to make much of a difference. I mean, you work however they work you and there’s never any guarantees. Even in your contract. If they let you out, they can let you out anytime pretty much. I’m very happy just being here.”

If Kelly’s plate wasn’t already full with Jack, you probably might not of thought about who else the character might make some magic with. During her live tweet on Tuesday, McClain wrote, “I’m good wit this!” in response to a pic of herself next to Scott Elrod, who plays Joe Clark.

McClain explains: “That would be pretty funny, wouldn’t it? Yeah, that would be hilarious. Getting together. They could, I don’t know, work together on something, but who knows. He’s pretty into Avery [Jessica Collins], I gotta say. That’s his goal and Kelly’s pretty into Jack right now, so it would have to be really down the line. Or they would hook up with a goal together and maybe just have like a casual fling, I’m sure. I don’t know about love, but it just can be fun. They can just have some fun.”