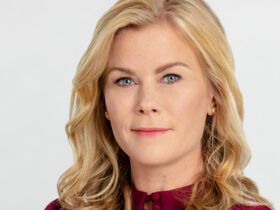 Alison Sweeney to Exit ‘Days of our Lives’

As previously reported, Brandon Barash is reprising the role of Johnny Zacchara on ABC’s “General Hospital” and it looks like he’s set to mark his return this week when Johnny comes face to face with Sonny Corinthos (Maurice Benard), at least that’s how it appears in the promo for this week’s worth of episodes. “Wait. What? Johnny’s back this week?!” tweeted Barash shortly after the promo was released.

In addition to the return of Johnny, Sam (Kelly Monaco) and Patrick (Jason Thompson) might be headed for splitsville depending on Patrick’s response to Sam’s question, “Is Jason [Billy Miller] alive?” Meanwhile, Nikolas (Tyler Christopher) demands Britt (Kelly Thiebaud) tell him what she’s keeping from him, and Fluke is finally unmasked…or is he?

For more on a mindblowing week on “GH,” click play on the video below:

To find out what happens next tune into “General Hospital” weekdays on ABC, anytime on ABC.com or Hulu.com/Hulu Plus.