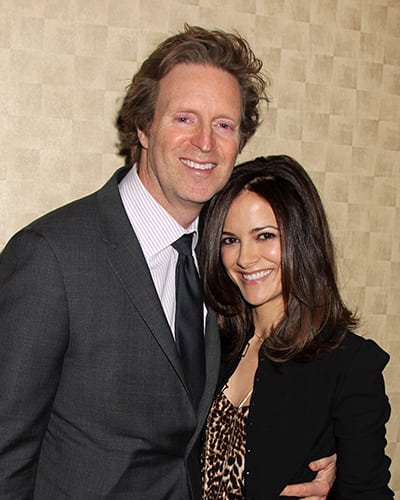 When “All My Children’s” Rebecca Budig (ex-Greenlee Smythe; ex-Michelle Bauer, “Guiding Light”) tweeted, “Waiting. Just waiting,” on Sunday, September 7, the world knew it was only a matter of time before the pregnant star would be giving birth. And it looks like yesterday was the special day!

The actress’ husband, Michael Benson, took to Instagram on Monday, September 8, to let the world know that he and Budig have officially become parents: “Welcome to the world, Charlotte Jo Benson,” he wrote along with a photo of the actress and their new baby. “Mom and daughter and doing great!”

Soap Opera Network spoke with Budig — who also serves as co-host of “The Better Show” along with JD Roberto — shortly before she gave birth, and though she was excited about the new journey ahead, she admitted she had a few reservations! “I’m terrified!” she said with a laugh, adding that her husband was the exact opposite. “He’s cool as a cucumber. He’s done it before, so he’s good.”

The part of motherhood that Budig has been very chill about was decorating the nursery. In fact, she admits that she barely decorated at all! “That’s who I am. I’m not the nursery girl,” she explained. “I mean, I got a crib. And I’m using a dresser as a change table. That’s what they are anyway!”

Congratulations to the happy couple on their new family addition!