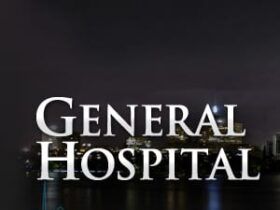 Alas, the actress has gone on record saying the show has not contacted her to reprise the role — at least, not yet! But she’s very open to the possibility. “Never say never!” she tells Soap Opera Network with a sly smile about whether or not it would be feasible for Lily to have survived the infamous fiery car explosion of 1996.

Whether or not a future Port Charles return is in the cards remains to be seen, but that may be the best for now, as Melgar already has a full deck! In addition to having quite a significant role in this season’s online soap, “The Bay,” she just finished filming a romantic comedy, hosts the online radio show “Soap Box with Lilly and Martha” alongside Martha Madison (ex-Belle Black, “Days of our Lives,” ex-Elizabeth Webber, “General Hospital”), runs a bath and beauty line called Scentual by Lilly and recently competed in a celebrity dance competition! In other words, she’s bringing new meaning to the word busy, and she couldn’t be happier that the recent year has brought so many adventures — especially the dance competition she did with Madison.

“Oh my gosh, the way that came about was so crazy,” she says with a laugh. “We had ‘Dancing with the Stars’” Elena Grineko and her husband, Rib Hillis, on Soap Box, and they just opened up a studio called LA Ballroom Studio. Now, if you can understand, I have never danced in my life. Except for cheerleading, because I was a cheerleader. Now, my dad is an amazing salsa dancer. I mean amazing, and he’s always pushed me toward it, but I was always resistant. Maybe because he wanted me to do it so bad? So you know, I’m Latin, and I can do a little salsa, but I’m not a dancer by any means. And so we’re on Soap Box and Rib says, ‘Our LA Ballroom Studio caters to professional dancers as well as beginning dancers, so if you’ve never danced before,’ and Martha jumped in and said, ‘Like Lilly?’ and I said, ‘Yeah, like Lilly, but I have rhythm!’ And then later on in the conversation, Martha said, ‘Well, I’ve been dancing my whole life,’ and I jumped in, and I said, ‘Oh look at her, she calls me out and says I’ve never danced, and now she’s saying how she’s danced her whole life!’ and I said, ‘I’ll dance you away!’ So next thing you know, like two hours later, we’re getting an email officially inviting us to be in their first official Celebrity Dance Challenge, and you can just imagine, I was like, ‘What am I going to do?! I am not a dancer, and they want me to compete against someone who’s danced her whole life?!’”

Eventually, the actress pushed aside her nerves and agreed to take part in the competition. “Every time I see ballroom dancing, I’ve been fascinated. I’ve always wanted to do a tango, but never made the time for it, unfortunately,” she says. ”And you know, we all watch ‘Dancing with the Stars,’ and we all fantasize and think, ‘Wow, wouldn’t that be awesome?’ So again, all I had on my court was desire, passion and attitude. So I went back and forth. I was like, ‘Am I going to make an ass out of myself? But hey, I get to take lessons, I get to do a tango, I get to live out a dream, so if I fail, I fail, but at least I did it.’ That was my attitude, so I took it on.”

Though accepting the challenge was a risk, Melgar is glad she did it. “I had so much fun!” she enthuses. “I did go through the crazy nerves and through some crazy doubts and major fear; I had all of that once it was getting close to the date. I really had some demons, but I had to say, ‘Hey, you can be in fear, or you can be excited and live out a dream.’ I mean, really, those were the two choices, so right before I went on, that’s what I thought: ‘For two minutes and 45 seconds, I get to live out the dream of being a dancer. I’m an actress, this is my role, do it.’ And I just gave it my all.”

In the end, her passion and enthusiasm paid off: She ended up winning the competition! Or, as she explains, both she and Madison won. “Literally, we both won,” she says, explaining that two of the judges — Louis van Amstel (“Dancing with the Stars”) and Snow Urbin (“So You Think You Can Dance”), who joined Christian LeBlanc, (“The Young and the Restless”) and Debra Wilson, (“Mad TV”) — gave Madison a higher score for technicality and technique, but the audience was responsible for voting Melgar into the top spot. “I got to take home the trophy, and she got to take home the great, great feeling of these professional dancers giving her such high scores.”

“I have always been obsessed with skin care. Obviously, growing up in an industry where you’re on camera, you have to be,” she says. “So I took it a step further, and I got really into researching ingredients, and I was buying certain products that were proven to have the best results, and I’d mix them together and make my own concoctions, and then I’d buy other products for the scents, because I love smells and scents. So I saw that I was spending so much money on different products to create my beauty ritual, and honestly, it was the ‘General Hospital’ fan club weekend that inspired me to take action and create my own line. Because I heard that we were able to sell our headshots, and I thought, ‘Well gosh, that’s not really what I want to support, you know? Selling headshots. I want to do something to share with the fans that’s more beneficial, it’s more me and it contributes to their life somehow.’ And it was the strangest moment, a light bulb moment, of ‘Do your line! You’ve always wanted to do your line, with bath and body, so just do it!’”

In addition to managing Scentual, the busy actress just recently finished filming a romantic comedy called “Tongue Tied,” which she estimates should be out later this year. “It’s a really fun story,” she teases of the film, which follows an Arizona talk-radio personality who awakens from a car accident with bilingual aphasia — he can only speak Spanish! “It’s so much fun, and I’m really very excited to be a part of it, especially because I got to play the sexy vixen sister who’s a hopeless romantic!”

As for her future career, you can bet that Melgar will continue to grace the screen. “I love acting, and whenever I get to do it, I’m grateful,” she says. “Whatever it is, if it’s a character I believe I can do justice, then yeah, let’s do it! I love the opportunity to do what I love.”