On Thursday, June 20, Prospect Park announced that they had come to a resolution to the dispute between it and the I.A.T.S.E. (International Alliance of Theatrical and Stage Employees) New York Production Locals 52, 161, 600, 700, 764, 798 and USA829, the union representing stage workers for the soaps, which alleged that Prospect Park had violated the labor agreement with the union. Prior to the resolution, Soap Opera Network spoke with “One Life to Live” star Robert Gorrie (Matthew Buchanan) about the early hiatus as a result of the dispute, his upcoming storyline with Amber Skye Noyes‘ Michelle, being a leading man on a soap opera and how his show is helping him grow.

“I knew when we started this venture that we were going along for an experiment and a ride. I think that the majority of the people involved in this are working hard to smooth things out and really get people back to work on time like they said they would in the fall,” said Gorrie, when we talked with him about the now resolved production hiatus that affected his soap and “All My Children.”

On Thursday, June 27, Amber Skye Noyes debuts as Michelle, Matthew’s online girlfriend who he’s been communicating with via social media over the past couple of months. Gorrie previews, “I think you can expect there to be as much intrigue as one would expect meeting anybody for the first time when you just meet them online. You talk to this person for awhile and then you have all these expectations built up, [who they are] and then when you meet them for the first time they either meet expectations or they don’t. You sort of have to develop the relationship all over again because it’s more personal now and not digitalized, I guess you can say.” Speaking in character, Gorrie says, “I’m not too sure how happy Dani [Kelley Missal] is going to be about my interest in another girl, or Destiny [Laura Harrier], and how they are going to feel about that.”

With Matthew having the unique honor of three different woman seeking his attention, the actor enthusiastically states, “I’m the luckiest man on the internet. Honestly, I feel blessed. I feel torn, not only as an actor, but as a human too, because you want these relationships to be organic and real. I have to spread myself out a bit more and sort of develop relationships with these [women] off the set and on the set. It’s a challenge because you want each [relationship] to be natural, but you also want them to be a little bit different because they’re different relationships. It’s been a challenge and I can’t say that it’s been an arduous one. I enjoy it.”

Earlier this month, Gorrie was also given the distinct honor of working with one of his idols – that being Snoop Lion (formerly known as Snoop Dogg). “I’ve been a fan of Snoop pretty much my whole life growing up,” Gorrie shares. “I have his first record. I love it when he does cameos. I’m just a fan of his in general.” Of course, some fans may not see things positively when it comes to the rapper/actor, especially with Snoop, who appeared as himself on the soap, seen smoking weed (it wasn’t real!) on the recently aired episodes. “People just have to accept him for who he is. I love that part about him. He’s laid back, he’s so cool on set. He’s really friendly. He’s a terrific actor. He took direction – he wanted direction – he sought it out. He’s like, ‘How can we make this better?’ He brought fresh ideas. To be able to work with him really was like a dream come true for me and in the first couple moments of that scene [referring to Snoop giving advice to Matthew], you can see that I’m smiling because I couldn’t believe what was happening. I definitely feel like I was blessed by the acting gods on that one. I was rewarded with this, ‘Okay kid, you can work with one of your icons.’ That was really cool.”

As for the advice that Snoop provided Matthew, and whether it will result in the character learning to take responsibility for his actions, Gorrie says, “I definitely think it’s lit some kind of light inside of his head and given him a different perspective from someone he wasn’t expecting to get that advice from. I wouldn’t expect the turnaround to be so quick. I definitely think that there’s some more moments he’s going to go through to further his alignment about being a father and stepping up to that role, but it’s definitely a step in the right direction and you’ll start to see him take that advice and come around. But that’s not to say there won’t be some hiccups along the way.”

It’s been seven years since Gorrie appeared on CBS’ “As The World Turns” in the minor role of Nate Bradley. When asked about the difference in working on “ATWT” versus currently working on “OLTL,” Gorries says, “They are very different. Not only just in terms of the size of the role that I had on ‘As The World Turns,’ but also the freedom that you have as an actor. I’m very grateful for this experience because I was able to grow a little bit more as an actor and as a performer because I was given more material to use and I got to work with more actors than I got to work with on ‘As The World Turns,’ [where] I had a specific set storyline.” He adds, “Whereas on this show, I work with my uncle [Jerry verDorn], my mom [Hillary B. Smith], my dad [Robert S. Woods], Corbin [Bleu]… I have a lot of different storylines, which is cool. But, in terms of production, I would say it’s a lot more lenient with dialogue and lines. Prospect Park really spared no expense. They treated all the actors really well. From craft services, to catering, to publicity, to the actual wardrobe that the actors wore – everything was first class and I tip my hat to them. They did it the right way.”

Some actors have publicly stated that they don’t actually watch their show despite millions of viewers scheduling time day in and day out in order to keep up with their favorite denizens. Don’t count Gorrie as one of them. “Because this is new for me as far as playing a leading man and having a journey as an actor to go through, I’m very curious to know how I’m playing some scenes so that I know what to do in the future as far as transitioning character arcs and stuff like that. I definitely do watch my performance to see if there are things that I need to make better or improve upon. And, I’m also interested in the other storylines. I like the show. I’m a fan of it.”

Speaking highly of “One Life’s” veteran cast, Gorrie says, “I continue to be impressed beyond measure when I see these guys perform. They make it look so easy and effortless. My experience has just been watching them, picking their brains, asking them questions, ‘How should I do this? Does this look alright when I do this? Why did you just do that?’ I’ve had a number of scenes with Jerry… he and I bounce back and forth really well with one another, which I think is important because the Matthew/Clint storyline has been one that’s been developed over the years by ABC. I’m glad to see that they’ve continued that and I’m happy because I feel like those scenes [referring to unaired episodes] are going to be really good when they do come out. I’m just blessed to work with such veterans and I want to carry on this knowledge to the future.” 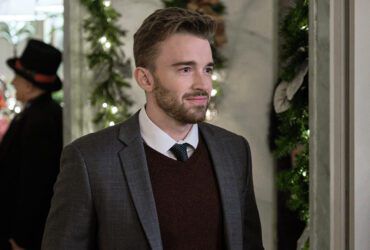