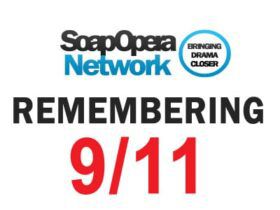 Tom Casiello
Breakdown Writer for “As The World Turns” on September 11, 2001

Tuesday mornings at “As the World Turns” usually meant all the writers, producers, CBS network folks, and P&G executives gathering in a conference room to turn pages from the breakdowns written last week, and sit through hours of notes. It was usually a day of neuroses and worry for any writer as our words were picked apart.

I remember being alone in my apartment that morning, standing in my bedroom getting dressed when the first plane hit. My roommate called from her office in Midtown, and we shared a far-more-nervous-than-either-of-us-wanted-to-admit chuckle about some moron who didn’t know how to fly before we hung up. Curiosity got the better of me, and I headed up the fire escape to the roof of my building. I live right over the Manhattan Bridge in Brooklyn, so the Towers were right there in front of me when the second plane hit. At that point, over the undercurrent of worst-case scenarios flowing through my head, I had only one screaming thought pounding away – You. Have. To. Get. To. The. Studio.

JC Studios is much farther out in Brooklyn, closer to Coney Island than Manhattan. My friends… my family… the people I’d spend most days and nights with working and playing and laughing and producing and practically LIVING with were all out there. I needed to get away from downtown Manhattan and get to THEM. I called the car service we used, and at that point, the city was still about twelve minutes away from complete and total panic, so I was still able to get a car sent to my apartment. I packed up what I believed were the most important things in my life: my keys, my MetroCard, my Palm Pilot, three DVDs, a laptop… and an 88-key Casio keyboard. (Why the keyboard? I have absolutely no idea – all I know is that it made sense at the time.)  The car picked me up – and by then, the march of people coming over the bridge had begun.

I got to the Brooklyn studio before the first tower fell. A few writers had made it in, our executive producer, and a few of the network executives.  I remember being completely shell-shocked watching the Towers fall on the TV, while the executives decided that we should have the notes meeting anyway. I remember frantically scribbling notes in the margin about whether or not to tag a scene on Barbara almost catching Carly designing clothes for her fashion house, or to save that moment for the next act, as New York City fell into chaos on the television above, all the while thinking to myself “Does any of this matter right now??” (In the executive’s defense, I also lugged a full electric piano with me all over Brooklyn that day – people do strange things in those circumstances. There’s no explaining it.) I spent the rest of the day and night at that studio, sitting in offices with my co-workers and best friends, watching TV and wondering “When is it safe to go home? And do I even want to go home?” When I finally did, there was an inch of ash on my fire escape – the wind had taken it right over the water onto my apartment. I didn’t sleep that night – I was up until sunrise contacting everybody I knew to tell them I loved them. And I cried. A lot.

Ten years later, I choose to remember September 11th not by the acts of terrorism, or by the fear and anger, or by the ridiculous notion that how we tagged a scene with Barbara and Carly mattered at all in that moment. Instead, I remember the bonds of friendship with the other writers and production staff I felt that day. I remember that day by embraces. By a hand holding mine. By a shared look. By finding ways to even get a smile out of the person crying next to me.  By holding on to the Oakdalians stuck at the studio for dear life and not letting go – and the way they did the same for me. (Even as they were saying “A keyboard, Tom? Seriously?” and I’d respond with “Dude, I just sat through the network meeting!” – yeah, those are the smiles I was talking about before.) There was so much dread that day, but I don’t focus on that now. Rather, I focus on the bonds that were cemented that day between myself and the cast/crew of “As the World Turns.”  Their friendship, their warmth, and their unrelenting compassion got me through that day… and later that week when we had to keep writing, even as I was walking back over the bridge to help in any way I could, I remember the phone calls and e-mails and the way we all just pulled together, even as we had to face working. (My favorite network note from the following week’s breakdowns was “Why is every character in these outlines crying or angry or both?” )

But the show… and the city… must go on. Even now, to this day, those of us stuck in the Brooklyn studio that day remember the horror and the tragedy and the almost-insurmountable sadness… but above all of that, there’s a shared sense of connection. Of odds overcome. Of friendship and family. A bond that can never be broken.

That’s the only way I want to remember that day.