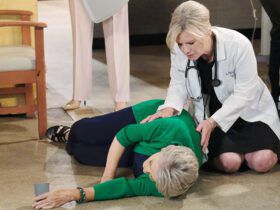 Ethan gives Kristina something to look forward to.

Michael and Jason discuss his future – will it be in the mob?

Skye attempts to flee town, but Anthony gets in her way.

Lulu packs her stuff out of Dante’s apartment, despite Maxie’s pleas to reconsider. Can Dante woo her back?