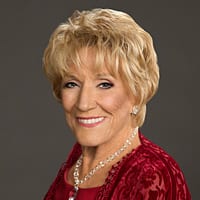 (SoapOperaNetwork.com) — A look at what’s happening on “The Young and the Restless” during the week of August 22, 2011.

The Inside Story: Tucker and Katherine Battle for Jabot
Tucker nervously gets ready for the competency hearing. Tucker is more than determined to keep Katherine from getting control over Jabot, while Katherine plans on using whatever tactics she can to push Tucker out. After everything has been put out on the table, the judge is set to rule in Tucker’s favor to keep control over Jabot, but Katherine blocks the decision when she pulls out the bill of sale. Tucker is furious and points out that Katherine is doing this just to stay in power. With the evidence presented to him, the judge begins to reviews the documentation. With Tucker’s back against the wall, he has two options: tell the judge that Katherine tricked him or back out and have the company placed in her hands. Tucker, refusing the lose the company, tells the judge that Katherine played him. The judge decides to hold off on making a decision right away, which in turn puts Jabot’s fate in uncertainty.

A Closer Look: Adam’s Actions Continue to Plague Sharon
After learning that Adam destroyed the memory card that contained evidence to clear Sharon, Noah confronts him, demanding answers. After going at it with one another about abandoning Sharon when she needed help the most, Adam takes a pot shot and tells Noah that if anyone abandoned Sharon, it was him, pointing out that he has barely gone to see Sharon since being sentenced. Meanwhile, Avery tells Sharon that while she hasn’t found anything yet to help clear her name, she’s still doing some investigating. Later on, Adam goes to the jail to pay Sharon a visit. Sharon continues to plead her case with him where Sam is concerned. She stresses that there is nothing between her and Sam. When Sam show up, also to see Sharon, Adam calls Sharon a liar.