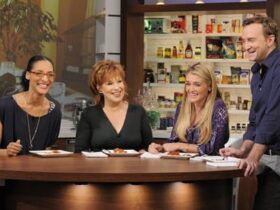 ‘The Chew’ by the Numbers: Three Days and Already Below ‘All My Children’s’ Year-Ago Performance

Cara tells David she’s starting to worry about him Griffin.

Zach asks Kendall if she trusts him enough to keep a secret. Cara tells Tad she isn’t going to the immigration interview.

Angie asks what happened to her baby.