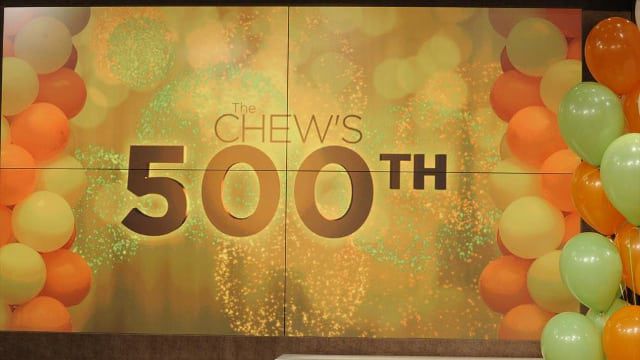 While ‘The Chew’ Celebrated Episode 500, Soap Fans Continue To Mourn Loss of ‘All My Children’

(SoapOperaNetwork.com) — “All My Children” is scheduled to last air on ABC on Friday, September 23. Although “AMC” and “One Life to Live” are slated to go on in a different format thanks to a licensing deal between ABC and production company Prospect Park, several events have been organized to assist the actors and viewers in saying good-bye to “AMC” in the format fans have come to know and love it in for the first 41-years of its existence. These events will be held on the East Coast where the soap was produced for four decades before being moved to Los Angeles in January 2010.

The upcoming scheduled events are as follows:

Good Night Pine Valley will be held on Saturday, September 17 from 1:30 PM EST to 4:00 PM EST at Prohibition Restaurant & Outdoor Cafe located at 503 Columbus Avenue in New York City, New York. This event will be hosted by Ricky Paull Goldin (Jake) and Alicia Minshew (Kendall). Expect special guests to drop by as attendees enjoy the company of the hosts, food and an open bar. There will also be a charity auction with prizes that include luxury items and items from “AMC.” Tickets for this event are now sold out.

A Tribute to Pine Valley: A Tribute of the Final Network Broadcast of “All My Children” benefiting A Season of Concern will be held on Friday, September 23 from 11:00 AM CST at Sidetrack Chicago, The Video Bar located at 3349 N Halsted Street in Chicago, Illinois. Attendees will get to watch the last episode of “AMC” with fellow viewers and past and present cast. During the event there will be trivia, a Q & A session and a Meet and Greet. So far the scheduled attendees include Chrishell Stause (Amanda), Terri Ivens (ex-Simone), Jeffrey Carlson (ex-Zarf/Zoey), Brian Gaskill (ex-Bobby), and Matt Borlenghi (ex-Brian), Chris Bruno (ex-Michael). More names to be added in the weeks to come. Talent is subjected to change without notice. Tickets for this event go on sale on August 22. Visit A Season for Concern site, which is linked above, for more details on this event as they are disclosed in the coming weeks.

A Tribute to Pine Valley: Celebrating 41 Years of “All My Children” debuts from Tuesday, October 25 thru Thursday, October 27 at The Town Hall in New York City on Tuesday, the State Theatre in New Brunswick, New Jersey on Wednesday and The Theatre of Westbury in Long Island, New York on Thursday. Scheduled attendees for this event include Cameron Mathison (Ryan), Michael E. Knight (Tad), Vincent Irizarry (Jesse), Walt Willey (Jack), Julia Barr (Brooke) and Jacob Young (JR). The event will be held in two parts. The first part is called “Live on Stage” where fans will be able to listen to personal stories from the actors and participate in a Q & A session. This event runs from 7:00 PM EST to 9:00 PM EST each night. Tickets for this event range from $45.00 to $85.00. The second part is called an “Up Close & Personal” where you get to meet and talk to the actors in a personal setting. This event runs from 9:30 PM EST to 11:30 PM EST. Tickets to attend both events range from $225.00 to $240.00. Tickets are now available for sale for this event.