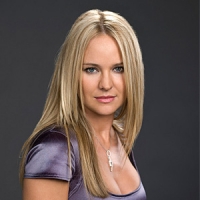 A stunned crowd watched as Marco and Lee approached Sharon, cuffing her. Sharon sputtered her apologies to a confused Sam, who wanted to know what was going on. Meanwhile, in Genoa City, Phyllis and Nick were getting ready to have desk sex when each received phone calls: Phyllis, from a source, giving her the news about Sharon, while for Nick, the detective on the case, letting him know that his ex was very much alive and being sent back home.

While listening to the audio on the memory card, Adam became happy to know that he would finally have proof that Sharon didn't kill Skye, but rather was trying to help her. He soon received a news blurb on his computer and was thrilled to find out that Sharon wasn't dead. As he was rejoicing over the news, back at Jabot, Jack, who was on his computer, was interrupted by Victor, who was there to harass him about Ashley possibly wedging him out of his job. Jack pointed out that he had three months to prove himself; and he planned on doing that. Their bicker session took a backseat however, when they got word about Sharon.

At Crimson Lights, Noah walked in to see Ashley with Faith. She asked him on how he was doing and he admitted it was hard for him scattering Sharon's ashes for the memorial service. When he looked up at the televison screen, he saw the breaking news. Both he and Ashley watched in stunned silence.

Phyllis, was the first on the scene at the police station, attempting to squeeze in to get the first interview. D.A. Walsh blocked her and told her she wasn't permitted anywhere inside. Depite her insistance, she was escorted out and she got her first look at Sharon, who was being escorted into the preceinct. Phyllis left the room and ran into Adam and immediately started to nag him. Not phased by her, Adam told her he was going to be there for the woman he loved. At that moment, Nick showed up and both he and Adam walked into the room to see Sharon for the first time.

Jack ran into Ashley and seeing her with Faith, begin to question her sudden bond with the little girl. Ashley assured her she was there only because Nick had a situation with the baby-sitter. Jack was still not convinced but shelved the worry to discuss with her about the news of Sharon being alive. Ashley didn't mince words on how she felt, pointing out that Sharon put herself before her children. When Jack started to place the blame solely on Adam and Victor, Ashley said that Sharon had a mind of her own and she used it to run away from everything and everyone.

Victor met up with Michael to discuss Sharon. Michael pointed out that now that Sharon is alive and back in Genoa City, it could spell trouble for his company. Michael advised Victor to stay away from Sharon and everything pertaining to what was going on with her. Despite his warning, it was clearn that Victor was going to involve himself.

At the jail, D. A. Walsh grilled Sharon, determined to get her to admit that Adam helped her escape. She told him that it was all her, but he laughed, saying it was impossible for her to do all of that on her own, that it was clear that she had some help. Sticking to her story, she said she was the one that left. Nick started to talk to Sharon and admitted that he was glad she was alive. When he slowly learned from her that she knew that everyone thought she was dead, he lashed out at her and said he was done. Adam, who was there, told Sharon he understood and was there for her.

Ashley and Jack were talking when Nick called to ask her to continue watching Faith for a bit. She asked him if he had seen Sharon and he told her he did and shared that she intentionally let everyone believe that she was dead. When she hung up the phone, Jack asked on the phone call. Ashley repeated what Nick and said. She said that Sharon was selfish to put her family and friends through so much pain; abandoning Faith and Noah because of her own needs. Jack tried again to place the blame on Victor and Adam but Ashley blocked it; Adam and Victor didn't make her decide to stay away; she did that all on her own. Meanwhile, Noah was on the phone trying to set up plane reservations to get out of Genoa City as soon as possible. Eden, who overheard, tried to convince him not to abandon his mother.

Sharon tried to talk to Adam about being in New Mexico, but Adam was too busy gushing on how he had her back. His gush fest was cut short when Sam walked in and called out to her. He told her he couldn't leave things the way they were without knowing what was going on. Adam saw the instant attraction between the two of them and realized that she moved on with Sam. Without a word, Adam walked out. He soon was at the bridge where the memorai was done. In a fit of anger, Adam threw the memory card; the only proof of helping Sharon into the river.