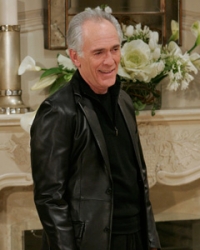 (SoapOperaNetwork.com) — A look at what’s happening on “General Hospital” during the week of July 25, 2011.

Lulu & Helena face-off over Dante & Luke on Monday, July 25. Helena makes a decision. Lulu heads home with an uninvited guest. Patrick uses romance to distract Robin from her duties on Tuesday, July 26, but things go awry. Patrick is caught in the middle as Carly & Robin’s animosity takes center stage. Johnny is put in a tough position by Kristina who later suffers a sudden dizzy spell. Alexis & Carly both react to the news of Jason & Sam’s engagement. Monica confronts the parties involved after learning about Jake’s true paternity. Things don’t cool down for Steve & Olivia even after she repairs his cooling unit. Will a return to a special place with Maxie finally cure Spinelli of the spell he is under on Thursday, July 28?. Shawn checks in on Carly. On Friday, July 29, we finally see what has become of Sonny in the aftermath of losing the love of his life. Anthony tries to worm his way into Tracy’s life.

The Inside Story:
Elizabeth & Siobhan fear for Lucky’s sobriety but disagree on whether or not he’s capable of handling a drug investigation. Though she believes he can ultimately handle it, Elizabeth fights to keep working at the hospital for the duration of his investigation to keep a close eye on him. Siobhan confides in Ethan. Elizabeth has a flashback of Jake. Siobhan finds an emotional Elizabeth. Lucky & Siobhan fight over Elizabeth’s continued involvement in his life. Jason consoles Elizabeth. Lucky is confronted by his former drug-dealer. Siobhan & Elizabeth face-off on the hospital roof-top. Elizabeth turns the tables on Siobhan when she questions her lack of faith in her own husband on Wednesday, July 22. Lucky battles temptation. Siobhan is hit with a sudden headache on the heels of witnessing a tender moment between Lucky & Elizabeth. Anthony sets Lucky up for a big fall.