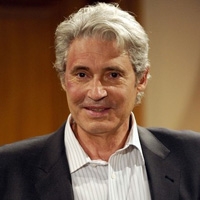 Frankie doesn’t believe Asher when he says he needs another bottle of pills because Colby lost the ones he had. Instead he’s convinced Asher is developing a serious problem. Asher threatens to find a doctor who will give him the pills. Caleb overhears Asher and Frankie and agrees his son needs help.

JR tells Amanda he can relate to some of what she’s feeling because of his own situation. He tells Amanda that Marissa fell in love with Bianca and takes a drink from a flask. Amanda’s sorry to see that he’s drinking again and hopes he gets his act together but won’t be the one to help him do it. Caleb and Asher find JR drinking in the parlor and Caleb grabs the flask and chucks it in the garbage. He plans on taking Asher home where he belongs. An angry JR doesn’t want Asher to leave and gets nasty, telling Caleb it’s a little too late to be a father now. Asher leaves and JR pours himself another drink.

Amanda tells JR about her biopsy but declines his offer of support should it turn out to be cancerous, saying he is the last person she would turn to for support. In tears, Amanda goes home to Opal and admits she might have cancer.

Tad tells Cara that Dixie’s father just passed away and they must have found the journal in his stuff. Tad reads the diary and learns that Dixie always wanted the type of life she had with him. Overwhelmed, Tad needs to get away from the house. Tad and Cara head off to the park and he admits that life with Dixie was a life changer for him, made him see himself differently. He figured if she loved him than he couldn’t be all that bad. Cara doesn’t believe he was ever bad so he tells her the story of “Tad the Cad”. Dixie changed him and when they were finally able to be together, she died. Tad comes to the realization that he needs to find out who he is separate from Dixie. Cara offers to help him move on like he helped her move on from Jake.