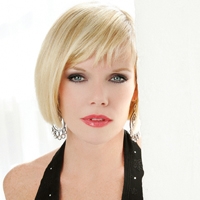 Nick was still irritated that Diane was on the flight with him. When he started downing scotch one after the other, she automatically thought something was troubling him. After learning that Nick was upset about being at the accident site, Diane questioned why he was able to let all that Sharon did go but was quick to condemn her.

Sharon feared that Adam would see her but was saved when Bob, the forensic expert approached him to tell Adam that based on his determination, and the cause of water on the road, Sharon's car went out of control, causing the accident. Sharon listened at they continued to talk, but so did man, not that far from Adam and the expert, curious to know exactly who's body could have been in the car.

Lily received a visit from Neil at the mental hospital. She told him that she had to have herself committed so she wouldn't be a danger to the twins. Neil told his daughter that everything was alright with her twins. Lily admitted that she was seeing Cane all of the time, even convincing herself that he was really there with her. After talking to her father, she stressed for him to keep her situation quiet. Meanwhile, Colin, who was aware of Lily being in the hospital, complained to Caleb that Neil had custody of the twins. He cut the conversation short when Jill arrived. In an effort to get what he wanted, he used Jill as a way to get to Lily. Jill, happy that Colin showed a lot of caring for Lily and the twins told him that they'd do what they could to help Lily as much as possible.

Still on the plane ride, Nick didn't hide with Diane how angry he was that she married her father; also making mention that he felt that she was trying to get back with him because he had a lot of money. Diane shot back that he was giving off mixed vibes when they were together. Back in San Pueblo, with Sharon still listening, Adam said that with the new information and everything cleared up about her death, he could move on with his life. She was interrupted, however, when Sam and Piper returned to the festival to come get her. She left with the two of them, even though a part of her wanted to go over to Adam. Once gone, the man who had helped carjack Sharon approached Adam and shared that his wife went missing the same night that Sharon had her accident. He wondered if there was some sort of mistaken identity involved. but Adam corrected him by telling him that the driver of the car was definitely Sharon. Adam decided it was time to leave, so he headed to the airport to go back to Genoa City.

It was Colin and Jill's turn to visit Lily. The two shared how they wanted to help them out; offering up for the twins to stay at the mansion with the two of them so that Neil could dedicate more time to her. Lily thanked the two of them for caring so much about her. When Jill and Neil stepped out of the room, Lily hugged an un-nerved Colin, thanking him for sharing his concerns with her father. Jill and Colin soon left and spent dinner at Gloworm, where Colin continued to talk on the idea of going to Australia. Neil soon arrived and thanked Colin for all his help.

Diane and Nick returned to Genoa City. Diane headed to the Athletic Club and went to her room, where she fussed that Nick refused to lean on her. As she continued to grouse about Nick, Nick, who was still angry at Diane, knocked on her door. When she let him in, he shared his frustrations with her by throwing her down on the bed, where the two of them got hot and heavy. As the two were getting busy, both were unaware that Adam made it back home and headed up to the suite that he shared with Diane. When he opened the door, he saw the two of them having sex.

A worried Caleb tried to talk his mother out of their plans due to what was going on with Lily. Unfortunately, Genevieve wasn't changing the course of what they had started and told her son that she was the one making the rules. Genevieve soon started to remember when she and Colin got married, but how things changed the night that Samantha had died; pitting Caleb against Cane because of it; and how she turned her back on Colin for good. After walking out on his mother for her refusal to change their plans, Caleb returned to offer his apologies. As the two talked, she shared that in due time, they would be able to reveal that it was Caleb, not he, Cane, that died on the church steps that night of Colin and Jill's wedding.