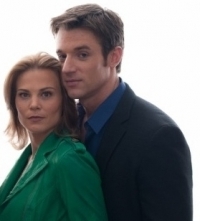 (SoapOperaNetwork.com) — With only seven months left to go before the show becomes a part of television history, two more actors are about to depart from “One Life to Live.” ABC Soaps in Depth reports that Gina Tognoni (Kelly) and Tom Degnan (Joey) will be both be leaving Llanview behind later this summer as their storyline winds down.

But there is some good news for Joey and Kelly fans, however, as both characters expected to ride off into the sunset together. The news comes only weeks after their co-star Robin Strasser (Dorian) tweeted that Tognoni, who returned to “One Life” in February 2010, was leaving the show. Tognoni originated the role of Kelly back in 1995. Degnan, meanwhile, became the seventh actor to take over the role of Viki and Clint’s youngest son Joey on November 24 of last year.

Final airdates for the actors have not been announced, however, look for them to continue to air through at least early July, when Joey tells Kelly how he feels about her and Dorian tries to play matchmaker. A spokesperson for the show had no comment.