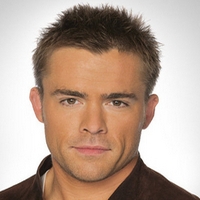 Rex gives Clint an ultimatum. Clint signs over everything to Rex. Rex tells Gigi that he had to do what he did, because now he has enough money and power to go after Todd and Jack.

Todd tells Jack he wants him to work at the SUN with Todd, and stop screwing up now that Todd bought him a second chance. Aubrey goes to Cutter with no place to go, asking to move back in to Asa’s. They argue, annoying Vimal who’s concerned about Rama’s “pregnancy.” Aubrey blurts that Rama isn’t pregnant. Vimal makes it clear his marriage to Rama is over, and she leaves. Aubrey and the pathetic Vimal finally persuade Cutter to let them stay there when Nigel returns with movers, telling Cutter the deed Clint gave him was a fake. All of them have to get out.

Joey and Kelly reveal to each other that each has been encouraged not to give up on the other. They almost make a step towards each other when they’re interrupted.

Viki hears Echo on the phone, not quite catching her plotting with Ionia. Echo tells Viki that Dorian is responsible for the damage to Clint’s heart when she didn’t call for help soon enough. Viki isn’t sure what to believe.

Meanwhile, Ionia has performed a charade with David in front of Dorian, making it look like she’s having an affair with him. Dorian is shaken, as is David, worried that Dorian doesn’t trust him. Echo is with Ionia, happy that the plot to mess with Dorian is underway and Viki is next.

Rama admits to Cristian the real reason why she allowed Vimal to believe she was pregnant is for money. Cristian, disillusioned, walks out on her.