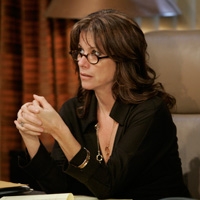 (SoapOperaNetwork.com) — A look at what’s happening on “General Hospital” during the week of June 6, 2011.

Jax continues to bait Shawn. Shawn confides in Carly. Brenda decides to accept Sonny for all that he is. Spinelli & Maxie’s moment is usurped by Matt’s heroics on Tuesday, June 7. Jason contemplates all the reasons there are for him to leave the mob. Will Sam encourage or discourage the hit-man’s second thoughts? Dante challenges Jason. Just as Michael reconsiders taking Johnny up on his job offer on Wednesday, June 8, Abby begins to consider Anthony’s job offer. Michael gets an unexpected letter. Elizabeth’s grief mounts as she watches Patrick & Robin with Emma. On Thursday, June 9, Elizabeth explodes after finding Steve & Olivia packing away Jake’s things. Johnny lies to Patrick & Robin. Anthony furthers his plot to turn Lisa into his lethal secret weapon.

The Inside Story: Teenager in Love
Kristina is delighted when Ethan confides in her about Luke. Ethan finds Maya in bed with another man after seeking her out. A heartbroken Ethan begins drinking heavily. Kristina causes Ethan’s headache to intensify when she settles next to him on his flight to the Dominican Republic. Kristina & Ethan are forced into very close quarters as they wait for the divorce to go through. Alexis & Sonny jump to the wrong conclusion when Molly details Kristina’s “romantic” adventure. Ethan ends up enjoying spending time with Kristina on Friday, June 10. Sonny & Alexis, meanwhile, rush off their flight in the D.R. and race into the judge’s chambers ready to object to Kristina & Ethan’s “wedding.”

A Closer Look: Family on the Rocks
On Monday, June 6, Lulu begins guzzling down liquor in front of a stunned Lucky after calling him out on his high and mighty preaching. Seeing things in a different light, Lucky decides to track down Luke to discuss things. Dante tries to console Lulu. Lulu & Dante make love. Lucky & Siobhan discover Luke is seeking refuge at the Bordello he grew up in. Maxie reaches out to Jason after Lulu lays into him on Luke’s behalf. Lucky confronts Luke at the Bordello.