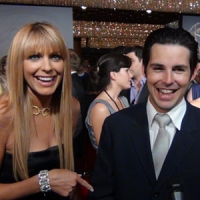 UPDATE 11:44 PM: In an earlier version of this report, we reported Jason Cook's characters name on "General Hospital" as Dr. Matt Drake, which is incorrect. Cook portrays Dr. Matt Hunter on the ABC drama series. We have since corrected this error and apologize.

(SoapOperaNetwork.com) — "LifeCHANGE," a new documentary series coming soon exclusively to the world wide web, delves into one's desire in making a positive and lasting impact as six people from different perspectives on the world take you inside their everyday lives where they meet new people and learn new things. The groundbreaking series was created by "Days of our Lives" star Arianne Zucker (Nicole Walker) and her brother Todd, with both serving as executive producers. Also an executive producer is Zucker's former "DAYS" co-star and current "General Hospital" cast member, Jason Cook (Dr. Matt Hunter).

"In September of 2007 my brother, Todd Zucker, and I sat down and had a conversation about making a difference in the world. Our vision was to give people, including ourselves, the opportunity to become whatever and whoever they wanted to be. It starts with someone giving you that chance," said Zucker in a statement. "I've been given a unique opportunity to work as an actor for thirteen years and now I want to help create opportunity for others. Our mission: Giving the opportunity to challenge ourselves and each other to the highest possible degree. To test our inner soul and human strength by working toward changing the lives of others, all while changing our own. The test, the challenge, and the obstacle is to prove to the world that we are true leaders in the fight for a 'LifeCHANGE.'"

"When Arianne came to me with this amazing idea for a show, it took less than two sentences to know I wanted to be a part of it. Together, we came up with a way to build the stage for positive change both in the 'LifeCHANGE' cast and the people with whom they will come into contact," said Cook, who also serves as a director on the series. "There are enough negative reality shows out there in the world. We believe that raising the trajectory of people's lives and providing a unique opportunity to 'pay it forward' will be an exciting journey for those involved, and everyone else watching."

Launching in the summer of 2012, "LifeCHANGE" will provide participants the ability to travel the world and learn new things about the things that surround them. They will help those in desperate need, while overcoming new challenges and roadblocks towards self-awareness. If you are interested in participating, you are asked to provide a a two-minute online video submission and complete a questionnaire that outlines why you should be chosen for the experience of a lifetime. Submission request information can be found on the LifeCHANGE website along with terms and conditions.

Completed episodes of the series will be made available exclusively online at LifeCHANGEtheshow.com.

For more from Zucker and Cook on "LifeCHANGE" and the future of their characters on "DAYS" and "GH," respectively, check out their Soap Opera Network: On the Red Carpet interview below.