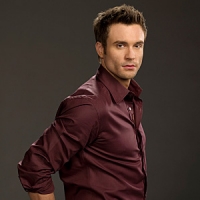 Colin and Jill had dinner at Gloworm together, and he made mention that she needed to be there for Katherine at the hospital. Jill initially balked at going but when Colin pointed out that she not too long lost her son, she soon changed her mind. They were set to go to the hospital when Neil arrived. Jill told Colin that he should share what he saw regarding Lily. He didn't want to do so but when Jill pushed him, he took Neil aside and told him that he had something to tell him. Meanwhile, at Lily's, she told Cane that she believed he needed to leave, fearing that since the twins are able to see him, others who visit could start questioning their behavior as Colin did with hers earlier. Instead of leaving, though, Cane instead pulled Lily into a kiss.

Katherine was pleased that Tucker seemed to be breathing on his own, but the doctor told her things are still touch and go and time would only tell if his health would improve. In another area of the hospital, Det. Mauro is headed for Abby's room, only to be disappointed that she isn't there for questioning. When she tried to get more questions out of Ashley, she backed off when Ashley told her that if she kept harassing her further, she'd have no other option but to call an attorney. When Detective Mauro left the room, Abby soon after was wheeled in; she started to question what her mother told her regarding the accident and told her that she remembered being the one that was driving; not Ashley. Ashley, however, continued the lie and told her daughter that she wouldn't remember what happened due to being passed out drunk.

Colin told Neil that he believed that Lily was having a conversation with someone that was obviously not there. Neil quickly brushed it away by telling him that he at times would find himself talking to Dru and even pointed out that Jill may have done the same from time to time with John. As they continued talking, Jill received a call from the hospital about Tucker and she quickly left. Leaving Colin with Neil, he told Neil that he simply cares for Lily and didn't want to see anything happen to her. Neil shot back that he barely knew his daughter. While the two men went back and forth about the condition of Lily, Lily, back at her apartment, was getting hot and heavy on the couch with her supposedly dead husband.

Katherine went to the chapel to pray, unaware that Tucker had another relapse. When she returned and discovered that Tucker was gone, Jill walked in at that moment to comfort her. The doctor came out to tell him that Tucker was rushed to emergency surgery due to more bleeding. He further explained that while they do have him intubated, they eventually will have to have it removed. Katherine is crushed.

Ashley informed Abby that a detective may want to question her about the car accident but told her that she didn't need to talk to her, since she wouldn't remember anything. A doctor showed up to check on her and told her that she would be set to go home soon. Abby apologized for being the one to tell her mother the truth about Tucker, but Ashley told her that it didn't matter. Jill soon interrupted and gave Ashley the status of Tucker's condition. Ashley rushed out of the room to go check on him, leaving Abby alone.

In the midst of passion, Lily pulled away from Cane, still unsure on whether if he is real or if she's truly imagining everything that is going on between them. He told her that he'd do whatever she wanted as long as he could be there with her. As they were talking, Neil, concerned with Lily after his conversation with Colin, stops by. When she turned around to answer the door, she noticed that Cane had disappeared, making her believe that she could have been imagining things after all.

Kevin and Chloe resorted to using a Ouija board to contact Jana. They start 'spelling' out words until they spell out the word good-bye. They both believe that her spirit has moved on.

Katherine took Ashley aside and consoled her, telling her that despite what happened to her son, she knows that Tucker deeply loves her. The two of them embraced. Meanwhile, Abby, who took her turn praying in the chapel, openly admitted out loud that she was to blame for causing the disaster with Tucker. As she finished confessing, Det. Mauro arrived and told Abby she had some questions for her. When Mauro asked her about the accident, Abby told her that she didn't remember much, since she was passed out. When the detective mentioned the argument she had with Ashley, Abby slowly started to remember parts of the accident. Before she is able to get more out of Abby, Ashley returned and stopped all questioning. Detective Mauro left and so did Abby, who went to Tucker's room. Seeing his condition, the younger Abbott broke down.

As Neil worried about Lily, Colin, who was at the park, talked to the fake Cane, telling him that once he's gotten Lily over the edge, he'd be more than happy to take the twins back home with him and raise them as his own.