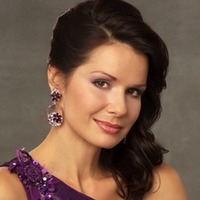 Todd insists to Téa and to Blair that he didn’t see Tomas in the window. Téa thinks Todd was originally lying but Todd swears that wasn’t the case. Téa goes to tell Tomas, and Blair is furious. Meanwhile Calmar visits Tomas who tells him he came to an understanding with Todd. Téa arrives and Tomas asks her to help sort out Todd’s recantation. Calmar warns Tomas that his fate is still entwined with Todd’s.

Aubrey and Rama try to keep Wes out of trouble while Cutter wants to take “him” away (to try to get Tess back). Cutter busts Cristian, exposing the fact that he’s serving Wes non-alcoholic beers. Ford discovers his ex wife is now a man. Ford berates Aubrey for leaving the baby at home. Cutter tricks Wes into stopping by the Minuteman. He takes off his shirt and parades around, trying to catch Tess’s eye, but Wes isn’t interested. Cutter challenges Wes to arm wrestling and pulls a move than ends in a kiss.

Hot dog-attired Ford goes home with a hamburger-attired girl, a law student. She thinks he’s trying to seduce her but he’s really just pumping her for legal advice re Ryder. James wonders if Ford is missing Tess.

Dani walks in on Nate and Deanna looking cozy, and she’s not happy. Dani gets a call from Tea who tells her about Todd’s recantation. Dani tells Nate her uncle is innocent but Nate doesn’t totally buy it. Starr and James are about to go to his room when Dani appears, complaining to James about his shuttling Deanna off to live with Nate.

Rama tells Cristian she didn’t tell Vimal yet that she’s not pregnant. She almost blurts something self-incriminating but she covers. There’s an electric moment between her and Cristian.