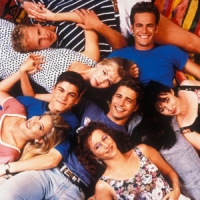 (SoapOperaNetwork.com) — I'm sure you have better things to do with your life on Mother's Day than spending four hours with the teens at "Beverly Hills, 90210" from 20 years ago, but SOAPnet is airing the billionth marathon of the show on your mom's most important day (besides her own birth and the day you kicked yourself out of her). According to the departing cable network, viewers will be treated to four hours of programming featuring some of the most beloved (and not so beloved) mothers from the popular 90's FOX series. In fact, you can get a chance to revisit Brenda's bond with mom Cindy, Kelly's fights with her mother Jackie, and Steve's jealousy over Samantha. The block of programming begins Sunday, May 8 from 8:00 AM-12:00 PM ET/PT only on SOAPnet (which isn't saying much).

• 8AM – Beverly Hills 90210 Episode #1991-006 – “Perfect Mom” – As The Mother/Daughter fashion show at school nears, Brenda is jealous of Kelly’s glamorous mom. However, when Jackie is high on drugs at the show and humiliates herself, Brenda learns to appreciate her own mother more.

• 9AM – Beverly Hills 90210 Episode #1992-038 – “Chuckie’s Back” – Steve is angry when his old nemesis, Chuckie, who played his mother’s son on a TV show, starts making his life miserable at school. When Chuckie reveals he’s known for years that Steve is adopted, the tension between Steve and his mother escalates as well.

• 10AM – Beverly Hills 90210 Episode #1992-040 – “Fire and Ice” – Brenda is crushed when the new boss she admires so much steals her sales at the store. Brenda and her mother then work together to give the boss a good dose of karma.

• 11AM – Beverly Hills 90210 Episode #1993–067 – “Midlife…Now What?” – Brenda and Kelly head to a spa with their mothers for a Mother/Daughter weekend and bring Donna and Andrea along. While there, Kelly discovers that her stepfather is cheating on her mother and has to tell her the painful truth.

In a press release issued to Soap Opera Network two days before the cancellations of "All My Children" and One Life to Live," SOAPnet claimed to "own" the world of character-driven soapy drama, from daytime and primetime dramas to reality shows and movies. The network features same-day episodes of popular daytime dramas including "All My Children," "Days of our Lives," "One Life to Live," "General Hospital" and "The Young and the Restless." Too bad not everyone seems to agree.