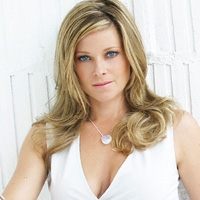 (SoapOperaNetwork.com) — On Friday, April 29, Cady McClain reported on her official Twitter feed that her discussions to return to “All My Children” had reached their conclusion – and that she would be returning to the soap she started her daytime career on. On Tuesday, May 10, McClain will return to the “AMC” set in California to begin taping what will likely be her last run on the ABC soap that is expected to cease production for good in August.

McClain, a two-time Daytime Emmy Award winner, debuted as the naive Dixie Cooney on “AMC” in October 1988. Alongside the talented Michael E. Knight, McClain would go on to leave her mark on the soap by becoming one-half of arguably “AMC’s” biggest super-couple, Tad & Dixie. Needing a break, McClain exited the show by the spring of 1996. Rested, she returned in July 1998 and remained on the show until Dixie met an untimely death in February 2002. The actress moved on to a successful run as Rosanna Cabot on CBS’ “As the World Turns” from April 2002 to July 2005. McClain would once again be lured back to Pine Valley and appeared as the back from the dead Tad Martin ex from December 2005 until January 2007. McClain was let go this time and Dixie was killed off for a second time. Since then McClain has returned for multiple short-term stints to both “ATWT,” including a short stint in correlation with “ATWT’s” final episodes in the fall of 2010, and “AMC.” The 41-year old actress was last seen on “AMC” on April 20, 2010. In the episode celebrating the life and times of Palmer Cortlandt, played by the great James Mitchell, Dixie welcomed her “Uncle Palmer” to heaven.

At this time “AMC” has not released McClain’s return date. The soap currently runs approximately four to five weeks between production and actual airing. Barring the show plugging new tapings into already taped episodes, which could move up the return date, McClain should be back on our screens by mid-June. In what form McClain will return remains a mystery. McClain would only drop this hint to fans, “think you will be happy with this story. Can’t say anything but that it’s a classic!”

UPDATE (5/10): This afternoon, on Twitter, McClain announced that her first air-date is Tuesday, May 17. With only seven days separating her first tape-date from her first air-date (and “AMC” currently taping material into June), all signs point to Dixie returning in the flesh. Working recently taped scenes into earlier taped episodes has usually been a precursor to signal the unexpected return from the dead of a favorite character. On this particular episode (May 17), look for both Tad and his current wife Cara (Lindsay Hartley) to coincidentally reflect on their great loves.