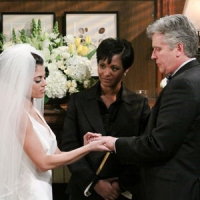 (SoapOperaNetwork.com) — As we exclusively reported yesterday, ABC has decided to pull the Tornado themed episode of "All My Children," which was scheduled for re-broadcast on Memorial Day, Monday, May 30. The episode was originally broadcast on October 17, 2008 and found Pine Valley in peril after being hit with a Tornado. Due to recent events, the network will air the wedding of Tad (Michael E. Knight) and Cara (Lindsay Hartley) instead. First aired on March 8, 2011, Tad marries Cara to help her with her immigration issues. Also in the episode, look for Ruth (Lee Meriwether) and Joe (Ray MacDonnell) to appear in support of their sons decision to wed.

Tad marries Cara to keep her in the country. Tad's father Joe is skeptical but his mother Ruth is supportive. Cara finds out that it was Amanda who called INS. Amanda refuses to attend the wedding and heads for the bar instead. JR brings up the past to Marisa but she is only focused on their future.

JR becomes sentimental and tells Marissa he wishes he could turn back the clock. On a call with Jesse, Angie questions the wedding but all Jesse can say is he’s adopted a “don’t ask, don’t tell” policy with Tad. Tad’s affected when Krystal tells him she’s moving out but reassures him that they’ll always put their kids first. Tad tells Ruth the truth about the wedding. Amanda tells Jake that she can’t go to the wedding because she’s sick but he knows she’s lying. Cara confronts Amanda and lays into her for turning her into the feds. Kendall gives Cara a memento for her wedding. Before the wedding gets under way, Griffin reminds Cara they can leave and hide somewhere else but she insists she wants to stay; she’s never felt so welcome in a town like PV. As Tad and Cara recite their vows, Agent Kaye leaves and sees Amanda drinking alone in the bar.