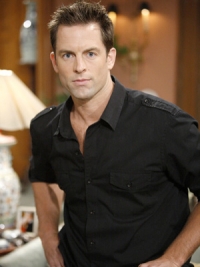 Adam arrives at Victor's ranch, furious that he's had the locks changed on Sharon's house. Victor tells him that he has no place there, therefore, he did what he wanted. His son blasts him, telling him that he has no claim on her home. Victor challenges him to take him to court. When he walks in, threatening to do so, DA Spencer Walsh appears, and tells him that he has some questions for him. After being finger-pointed as the one that helped Sharon get away, an angry Adam tells DA Walsh to either arrest him or go to hell.

Phyllis and Jack are getting ready for Sharon's funeral. He comments that she's been acting distant ever since returning from the Caribbean. She quickly defends her mood by telling him that she's been busy with work and dealing with Summer. Jack asks why she's getting upset. Again, she defends her mood and tells him she's been exhausted and all she wants to do is go to the funeral.

Sam offers to help Sharon by giving her some money to get some necessities or in case she needs it on her way back to where she was headed. She instead takes up his offer to get her a fresh change of clothes. He agrees to take her, but she balks and tells him she simply doesn't want anyone seeing her. Sam takes her list of items she wants and heads out.

Kevin is upset that the account information has been wiped away from his computer. Jana wonders who would go to such lengths to keep them from finding out the truth. The minute Daniel and Abby walk in, Kevin begins to put the pieces together and realizes that he was the only one that was there at the time the two were on the computer. He approaches Daniel and states his accusations at him. Daniel tells him he had nothing to do with his computer. An angry Kevin punches him and tells him he's not giving up on finding his niece.

Nick, Doris and Noah are the first to arrive at the funeral home. As they are talking about her, a delivery man comes in with a large bouquet of mixed roses. Nick goes over to find out who they are from and is annoyed to discover that Adam sent them. Jack and Phyllis arrive at the church and as Jack is consoling Noah, Phyllis exits to see Nick. She tells him that they need to do something; she can't keep lying to Jack. Offering him comfort, Nick accepts, the two unaware that both Jack and Diane are looking on from a distance.

Jana heads back to the Abbott home to see after Lucy when the doorbell rings. She opens it and is stunned to see Agnes there. She asks how she found her. Agnes admits that she followed her from the coffee shop. Agnes tells her that she can't stop thinking about her wanting to find the baby. In turn, Jana gives her telephone number to the young woman and gets hers as well. When Agnes is set to leave, she spots some of baby Lucy's clothes. Picking up an outfit, Agnes exclaims that it was what her baby was wearing at the time Primrose took her baby.

The funeral is set to start. Abby wants to know why Daniel and Kevin were fighting. He brushes it off, but when he's set to go into the church, he spots Billy and wants to talk to him. Before the two can get into conversation, the pastor calls them to come in for the service to begin. Minutes later, DA Walsh and two cops arrive. He has them posted at the entry way of the church, specifying that Adam is not to get in. When he does arrive, he tries to push his way in, but is stopped when the DA tells him they have a restraining order. The police usher an angry, yet determined Adam out of the church.

Changing into her clothes, Sharon stares at herself in the mirror and day dreams that Adam has come to be with her. As he is hugging her, she smiles, but her smile changes when Adam lets her go and asks why she left him. The daydream soon changes to Nick and Noah asking her the same thing: why she had to leave them behind. A heartbroken Sharon questions what she's to do. Just then, Sam arrives, and she quickly covers her sadness.

The pastor starts with the service and says words about Sharon. While the service is going on, Adam, who is outside the church spots his roses thrown on the ground. He spots his opportunity to get into the church when he spots the trellis railing leading up to the bell tower. Back inside, Nick is sharing with his family and friends the first time he and Sharon met and fell in love. Phyllis and Diane watch on as he says that Sharon was his one true love.

As the funeral is concluding, everyone is getting ready to leave when the bell begins to chime constantly. Adam descends down and tells everyone that he's not going to be kept from Sharon's funeral by them. He's going to have his say about Sharon and they can't stop him from doing it..