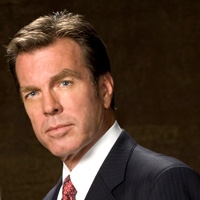 Nikki is surprised to see Victor and Diane at the restaurant, thinking the two would spend a quiet night at home as they talked on. Before Diane can muster up a comment, Jack arrives, pretending to be Nikki's date; clearly annoying the likes of Diane and Victor. Seeing an opportunity, Jack puts the new Mrs. Newman on the spot, telling Victor the information he received from her about Nick and Phyllis being in St. Martins. Victor quickly cuts the pleasantries and ushers his wife to their dinner table, leaving Jack and Nikki both delighted by the scene.

Nick and Phyllis, both hitting a dead end with trying to track Adam, have no choice but to book a hotel for the night. While they are settling in, Nick kindly starts ordering them dinner, making sure to order all of Phyllis's favorite items. She is pleasantly surprised.

On the side of the road, Sharon listens and re-listens to Adam's voice mail. Sticking to her guns in going on without him, she deletes the message and is set to leave when a woman approaches, pulling a gun on her. she demands that she gets out, get on her knees and hand over her jewelry. A second accomplice arrives and the two demand she count backwards from 500. A fearful Sharon does the countdown as the two drive off with her car.

At the dinner, Victor questions how she knew about Nick being with Phyllis in St. Martin. Diane tells him that all she did was call Nick in regards to taking Summer to the school play with her and Kyle. Feeling that she's being questioned over and over about Nick, Diane tells him that he's less that honest with her when it comes to Nikki. She points out that it is obvious to her, and everyone else that there are still feelings between the two. She wants to know why he asked her to marry him if he was going to devote his attentions to everything and everyone, except her.

Nikki, sensing that Jack is uneasy about Phyllis and Nick being together, tells him that he shouldn't worry about it. She knows her son and knows that with everything that has happened in his life, neither would cross the line. As for the exes, they enjoy dinner and the outdoor view with one another. Nick admits to Phyllis that he never wanted their marriage to end; he never wanted to lose her. Quickly changing the subject, a slightly flustered Phyllis goes to the room to grab a deck of cards for them to play with.

A nervous Adam continues to call Sharon and enters the little motel room that she was staying in. Not getting a response, he sits wondering where she could be, when he spots the three written letters. Picking up his, he opens it up to read. He is heartbroken to read that she wants him to get on with his life and that even though she truly will always love him, the two of them can no longer be together.

Victor apologizes for his behavior toward Diane and tells her that she truly has been there for him. She tells him that she knows that he was going through a lot at the time that they married, but she wants to be there for him, always. When he asks her why she agreed to marry him, she tells him that he's one of the few that truly believe in her and his generosity toward her won her over.

Jack notices that Nikki can't shake her bitter feelings about Diane and Victor being married. He tells her that she's going to have to do whatever it takes to get over the man; after all, he married someone else. Nikki realizes that he is right, but admits that their history is complicated. The two share ginger ales together, but when Nikki spots a bottle of vodka, she promptly excuses herself to head to the ladies room. Once gone, a lady comes up to Jack with flirty words, asking to sit with him.

Sex is in the air when Nick and Phyllis give in to their sexual tension and hit the sheets; while back in Genoa City, Victor and Diane get hot and heavy, but clearly have their respective others on the brain.

While Sharon is having something to eat at a small diner, Adam, who's still at the motel gets news from the motel owner that he just heard on the radio that a car fitting Sharon's description was just reported being in a car accident.

Grabbing her food to go, Sharon's attentions are piqued when she overhears the news report that there was a car accident and that one fatality has been discovered. Adam, who is driving to the location, is stunned to hear that it looks as if Sharon was the one that was killed in the car accident. Adam falls to his knees at the 'loss' of the woman he loves.