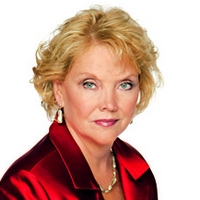 Phyllis Rose drops her bombshell and shows Tess’s photo of Charlie and Echo kissing. Natalie’s aghast, telling her mother that she’s sure it’s been photo-shopped, but Viki sets her straight. When she reveals that Tess sent her the same photo and likely leaked it to Phyllis, Natalie gets mad and goes to confront Tess. But Tess arrives at Llanfair instead, telling Viki to give up her fight for Ryder’s custody. Tess accuses Viki of being a failure in marriage and in motherhood. She hammers at Viki until Viki is writhing in some sort of private struggle. Tess thinks she’s having a heart attack until Viki reveals that she’s Niki Smith. Bo and Clint have it out about Matthew.

Bo laces into him for everything he’s done, swearing Clint will get what’s coming to him. Clint keels over from a heart attack. Nora levels with Matthew about the fact that he murdered someone, asking if he can live with what he’s done. Matthew reveals the depth of his guilt. Nora asks if he wants to confess and be punished for his crime. Dorian’s horrified to learn of Echo and Charlie’s affair and that they’re in love. She accuses Echo of having known all along that Charlie wasn’t Rex’s father.

Ford feels terrible that Tess unleashed the photo of Viki and Charlie, expressing sympathy for Viki. Tess sets him straight about Viki, explaining that she’s the reason Tess exists. Her alter, Niki, sat in bars and left Jess alone with an abusive man. Jess created Tess to protect herself. Ford tries to comfort her, but she pulls away. Natalie arrives and gives Ford a piece of her mind for teaming up with Tess.