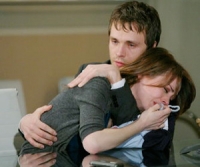 Maxie tries to set Elizabeth up to let Lucky know the truth about Aiden’s paternity. Instead, Elizabeth and Lucky share a heartfelt moment in which she supports his marriage to Siobhan.

A self-destructive Luke arrives to Sam and rants about Jason – purposely provoking Jason to come after him. Luke waits in his office with an empty gun in hopes Jason will show and shoot him, but Sonny shows up instead.

Dante refuses to give into Sonny’s pressure to use PCPD connections to protect Michael, and he intends to prove Michael’s innocence. Michael erupts in anger when Abby is arrested for Brandon’s murder. Michael makes a (false) confession after punching Dante, who brings to light evidence that Abby is guilty.

Tortured by Michael’s chosen path and Jake’s death, Jason tells Sam his doubts about being a good father and role model.