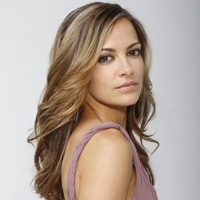 Tad finally allows Cara to help him with his investigation in to who stabbed her brother. They spot the man who stabbed Griffin at the bar at Krystal’s and when he leaves the two follow and split up for a better shot at catching him. Cara winds up being ambushed but Tad comes to her rescue. Jesse’s called in and the man is taken to the station. Griffin ID’s the guy as the one who stabbed him but the story’s turned around when the guy acts like he knows Griffin and says he did it to defend Diane. While on a picnic with Ricky, Kendall wonders out loud what kind of person would set up Griffin. When Ricky discusses a conversation that Kendall had with Zach, she questions how he knew that, word for word. Ricky quickly covers that she told him once after she had too much wine. Ryan and Ricky look through some of Diana’s belongings for evidence. Ricky finds a photo where he is clearly in the background and removes it. Needing some time alone, Kendall goes to the yacht where she accidentally discovers the original letter from Zach with the missing page that points the blame at the casino owners should something happen to him.

Greenlee seems to be making headway with Emma when she brings her down to Fusion but once she sees a photo of her mom, Emma gets upset and runs towards the elevator unaware that it’s dangerous. Once she’s freed Ryan insists her behavior stop immediately.

While he has been trying to do things the “right way”, Scott finds that he isn’t getting the benefit of the doubt after he’s passed up for a job at the hospital. Thinking that honest work isn’t always the best way to go Scott calls JR to discuss opportunities for the both of them.