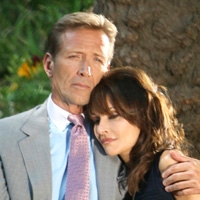 Caleb makes his case to Erica on why she should go with him, and then waits at the airport hoping she will show. A torn Erica remembers times between her and Caleb and her and Jackson. Erica arrives for the rehearsal and sees Jack at the altar but before she can do anything someone puts a cloth over her mouth and she passes out. No one sees what happened and when she doesn’t show Kendall and Bianca go off looking for her. Opal tells Jack she might not have showed up because of Caleb.

The tension between Emma and Greenlee continues as Emma decides she no longer wants to go to the ocean now that she hears Greenlee is going too. Jack advises his daughter not to give up on Emma.

Ricky tells Kendall that Griffin wouldn’t have been denied bail if there wasn’t a strong case against him and assures her that she wasn’t wrong for ratting him out. Tad questions Liza on the real reason she won’t help him with an appeal for Griffin. Griffin is stabbed in the back and Cara watches as he collapses.

Bianca’s grateful Marissa came to St. Bart’s to tell her the good news about Reese. Marissa admits to Bianca that she kissed JR but doesn’t want to have feelings for him.