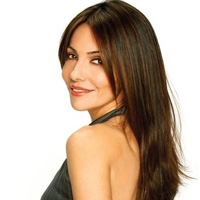 (SoapOperaNetwork.com) — In an interview with Access Hollywood Live hosts Billy Bush and Kit Hoover on Thursday, March 3, actress Vanessa Marcil Giovinazzo made it clear that her time on ABC's "General Hospital" as Brenda Barrett (now Corinthos) will soon come to a close after her contract with the drama series expires.

"I came back to honor my roots. These are the people that I grew up with. I haven't been a regular on the show in 13 years. It was like going to an incredible high school reunion," said Marcil Giovinazzo of her time back at the Prospect Studios where "GH" is filmed. "We had so much fun. I have so much respect for these people. They work so hard. I loved being there. We shot the wedding for seven days. We just had the best time. There were all these insane things that happened and now after the wedding, there's a lot of drama because now my time [on 'General Hospital'] is almost done."

While a final airdate has not been set, nor is ABC commenting on her statements, Marcil Giovinazzo shared that she won't be closing the door on returning to the soap in the future. "I have always been in touch with the headwriters and the producer. I've always loved the show and I've always said 'I'll come back and visit for the rest of my life if they'll have me.' I love to visit there. I love the people. It really is kind of the greatest character I feel like I've ever played as far as feeling challenged and satisfied. It is a great group of people."