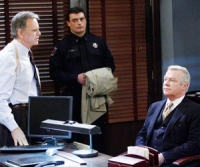 Phyllis Rose (Wendy Williams) dishes the latest gossip on "Access Llanview" on Monday, March 28.   David and Dorian are finally wed. Deanna is tempted by a stranger.  James' receives a reminder of his past.  On Wednesday, March 30, Tess meddles in James' personal life.  Langston confides in Starr about Ford.  Starr makes an interesting discovery while helping James, who makes a confession to Starr. And Deanna finds herself in a dangerous situation.

The Inside Story: You're Cheatin' Heart
Rex finds the proof he needs.  Jessica is shocked to learn of Tess' actions, and is reunited with Ryder.  However, Tess quickly regains control.  Clint is placed under arrest.  Natalie is shocked to learn that her father has been thrown in jail on Tuesday, March 29.  John makes a confession to Natalie, and later sees her with Brody.  John and Kelly come to a realization.  The judge reaches a decision in Ryder's custody case on Wednesday, March 30.  Joey fusses at Cutter.  Aubrey tries to win over Joey's trust, and butts heads with Cutter. Bo urges his brother to do the right thing.  Nora tries to recall the night of the murder.  Viki pursues custody of Ryder without Clint.  Tess sends Viki the picture she took.  Charlie tells Echo that Viki needs him.  Nora passes out.  Clint gives Bo a warning, and blames someone else for the murder.  And Viki makes a horrifying discovery on Friday, April 1.

A Closer Look: Peer Pressure
Blair and Cristian have a run-in with Kassandra Kavanaugh (Kourtney Kardashian) on Monday, March 28.  Blair tells John that she found Tomas alone with Todd in his hospital room.   Dani confides her suspicions about Shane to a unsuspecting Blair. Jack has a few choice words for Starr about both James and Dani.  Shane continues to be tormented by Jack and his posse.  Rex is stunned by what he learns about his son on Thursday, March 31, and goes after his attacker.  Starr questions Jack.  Rex and Gigi can't find Shane.  And Jack pushes things too far.