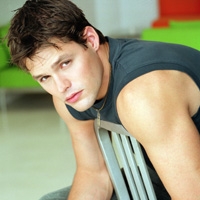 Justin Bruening will star opposite Adrianna Palicki of “Friday Night Lights” fame in the NBC television series reboot of “Wonder Woman”. Bruening will play Army veteran and Justice department employee Steve Trevor. The pilot produced by David E. Kelly has been given the green light by NBC and will debut next fall.

The casting call for Bruening’s Steve Trevor describes the character as “a leading man Diana can’t look past. Good looking but a real man”. Steve is the main love interest of Palicki’s action-heroine who carries along no less than two alter egos – billionaire businesswoman Diana Themyscira and her assistant, Diana Prince. The original “Wonder Woman” TV series which aired from 1975 to 1979 on first ABC then CBS starred Lynda Carter in the lead role and Lyle Waggoner as Steve Trevor.

Bruening, a successful model who appeared in ads for Abercrombie & Fitch, began his acting career on ABC’s “All My Children” as Jamie Martin, son of Tad Martin (Michael E. Knight) and Brooke English (Julia Barr). Bruening played Jamie from 2003 – 2007. The actor met his wife of nearly 6 years, actress Alexa Havins, on the set of AMC; the couple have a 8-month old daughter, Lexington Grace. Following his “AMC” departure, Bruening landed the lead role of Michael Knight in NBC’s reboot of “Knight Rider” which ran for 17 episodes through the 2008-2009 season.

Until the fall debut of “Wonder Woman”, Bruening will keep the acting fires burning with a few guest appearances in prime-time. On Monday, April 11 fans can watch Bruening portray swimmer and suspect Rob Tredwyck on a new episode of ABC’s “Castle”. The actor will then show up on NBC’s new sitcom “Friends with Benefits” which is set to debut this summer.