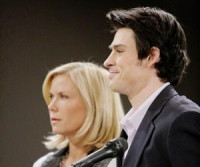 Brooke begs Ridge not to cancel the line Thomas worked so hard to build. Ridge says that it's already done. Brooke asks him to think about it for a couple of days. Ridge says he can't do that. Thomas crossed the line with him and there's no way he's changing his mind. Ridge said he has to protect Thomas from himself because he has underlying feelings for Brooke, thanks to the Taboo line. "As Thomas pointed out, he's very much like I was at that age. I know you don't want to be, and I know he denies it, but you are a temptation to him. It'll be best for everyone if we just put a halt to the line.". Brooke asks about the conference. Ridge tells her that Madison has already canceled it. Brooke worries about Thomas and if he's able to understand this. Ridge says that he's an excellent designer and that he'll be able to get over this and then move on. Just then, Stephanie enters the room and says she and Ridge need to discuss what's happened. Ridge says everything's under control. Stephanie isn't having it and blames Brooke again. Brooke leaves and says she's going to see Thomas. Stephanie says she shouldn't be anywhere near him. Brooke says Thomas is devastated and needs the support. She then leaves the room.

Alone together, Stephanie asks Ridge when he plans on dealing with Brooke. Ridge said she isn't the issue here, Thomas is. Ridge tells her not to do this when her and Brooke have come so far. Stephanie says she's beginning to believe that was the biggest mistake in her life. She tells him she feels betrayed by Brooke.

Madison is worried about what Thomas told her to do. She said that it's not to late to turn back. She's worried about him. Thomas says that everything will continue to go on as planned and that he'll be fine. Madison wonders why Ridge wants to cancel Taboo in the first place. Thomas tells her that it's complicated and to not worry about it. She leaves.

Summer visits Thomas and they make-out. She tells him that everyone's excited wondering what he's going to do next. She asks for a clue on what's to come. Thomas says he doesn't kiss & tell and that it won't be long until he reveals what's next. The two kiss again just as Taylor approaches the door. Madison leaves. Taylor says that her and Thomas need to talk. She told him that Ridge had to be told about the kiss. She also said she knows he's upset that Ridge canceled his line, but that this is not the end of his career. "No mom, it certainly isn't." said Thomas. Taylor asked if things were ok between them now. Thomas said not exactly because she shouldn't have told Ridge about the kiss. Taylor once again said that it was something she just had to do. Thomas said his father is out of control and he's just overreacting. Taylor wondered if Thomas was willing to work things out with his father despite their differences. "If he wants to talk to me after today, I'll be ready and willing.". Taylor wondered why after today and not now? Thomas said he had something to tend to and then headed for the door. Taylor asked if things were at least ok between them now. "You know what, let's wait until the end of the day, see how you feel" said Thomas. He left the room. Taylor looked puzzled.

At the press conference, Eric, Thorne, Katie, Oliver and Donna are all in attendance. Jarrell (a reporter) asks Eric what's to be expected at this conference. Eric says he has no clue. Katie asks Oliver if he might know anything since he had a shoot with Brooke and Thomas earlier. He keeps his mouth sealed. Thorne doesn't know either. "We have no idea what Thomas and Brooke have up their sleeves."

Alone together, Stephanie asks Ridge when he plans on dealing with Brooke. Ridge said she isn't the issue here, Thomas is. Ridge tells her not to do this when her and Brooke have come so far. Stephanie says she's beginning to believe that was the biggest mistake in her life. She tells him she feels betrayed by Brooke. Ridge says that Brooke did this to protect Thomas. Just then, Taylor barges into the room and says that Brooke wasn't trying to protect anyone but herself. Stephanie tells Ridge that the woman he's married to has ruined his relationship with his son. She then goes on to remind Ridge about how he said that if Brooke lied to him again, he'd go back to Taylor. Ridge said that this was totally different. Taylor dodged the whole thing by saying that Thomas needed his father right now. Stephanie told her that Brooke had already gone to visit him. Taylor was worried because she knows Thomas is vulnerable to Brooke, and she thinks Brooke is starting to become vulnerable to him as well.

Madison enters the room and breaks the news to Ridge that she didn't cancel the press conference and that it was about to begin. Shocked, Ridge left the room. Taylor and Stephanie followed.

Thomas arrived at the conference to a room full of welcome applause. He was bombarded by the press. Jarrell asked him if there would be any surprises today. Thomas assured him that there would be. Across the room, Brooke arrived at the conference and asked Madison what was going on. Thomas came up to them and dismissed Madison. Brooke asked what was going on. "We're addressing the press, are you ready?" said Thomas. He told her that he stopped the cancellation memo from going out. He told Brooke that he wanted her standing next to him when he addressed the press. Eric introduced Thomas to the runway stage. He tells the press that he plans to expand the Taboo line and possibly explore a woman's line. Ridge, Stephanie, and Taylor arrive in the back just as Thomas announces that he and Brooke are planning another European tour. "Taboo will be everywhere, and we will be to. So look for us as we'll be looking for you. Nothing can stop Taboo."