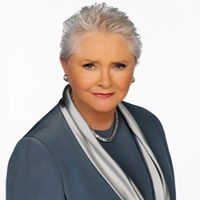 Brooke asked for Ridge's forgiveness. She promised that she'd never keep a secret from him again, no matter how small or insignificant she may think it is. Ridge is still upset that she didn't tell him right away. Brooke tells him that she just didn't want to jeopardize his and Thomas's relationship. Ridge says that he's not angry with her, just disappointed and concerned. Brooke apologizes again and gives him a light kiss before leaving his office.

Stephanie wonders how the kiss happened and why Brooke would do such a thing. Taylor told her that Thomas was the one who pursued the kiss and that Brooke was asleep while it happened. She created an oral picture of Brooke as the seductive femme fatale ("sprawled out in her lounging pajamas looking all vulnerable") who thought of the kiss as no big deal. Stephanie accused Taylor of hoping this all leads to Ridge leaving Brooke for her. Taylor was quick to say that she's happy with her husband Whip and then she hastily changed the subject back to Brooke keeping the kiss a secret. Taylor says that Brooke is way to sexual and that's why Thomas couldn't resist kissing her. She then accused Brooke of loving having all the Forrester men lust after her. "She's got all three Forrest men — all the generations — lusting after her, and that's what she wants. She wants to be with the Grandson now, and she's going to succeed if she isn't stopped."

Dayzee runs into Thomas at Forrester Creations where she went to visit Pam. Pam reveals that Dayzee is there for photos to put into a care package that she's making for Marcus, whose in Paris. Thomas sees a sexy photo of Dayzee and asks if there's a wallet sized version that he could have for himself. Later, Dayzee compliments some photos she comes across from the earlier Taboo photo shoot. Thomas told Dayzee about the latest drama going on with his family. Dayzee asks if it will affect his line, Thomas is afraid that it will but is hopeful that Brooke could get through to Ridge.

Thomas visited his father and asked if they could talk. Ridge asked how the kiss happened. Thomas said that he was sorry and that it was harmless. He assured Ridge that the kiss was all him and that he convinced Brooke not to say anything. Ridge told Thomas that he disrespected him and his marriage. "Like father, like son" Thomas snapped back. He reminded Ridge of how he stole Brooke from Eric. Ridge said that that situation was complicated and that he didn't steal Brooke from anyone. He then asked Thomas if he was in love with Brooke. "I love Brooke. After everything she's done for me over the years. but no I'm not in love with her.". Ridge told him he just couldn't understand what possessed him to kiss his wife then. Thomas told him that it was just in innocent impulse. Ridge told him that it was inappropriate. Thomas disagreed. Ridge accused Thomas of fighting real feelings for his wife. Thomas told Ridge to get over it already. Ridge was annoyed with how disrespectful Thomas was being and then decided to cancel the Taboo line.

Brooke joined Taylor and Stephanie. Stephanie asked if what she heard was true and Brooke confirmed it. Stephanie tells Brooke that she is very disappointed and Brooke agrees and tells her she regrets not telling Ridge right away, but Thomas convinced her not to. Taylor jumped into the conversation and confused Brooke of trying to "corrupt" Thomas. Brooke said that she'd like to talk to Stephanie alone. Taylor accused her of trying to weasel back into Stephanie's good graces, and then advised Stephanie not to believe a word she says. Brooke asked Stephanie to not forget the bond they've created recently after all these years. Taylor interrupted. "After all these years of sleeping through her family, her husband, her sons, and now you're doing everything you can to hop in bed with her Grandson?!". Brooke begged Stephanie to forgive her and reminded her of all they've been threw these past few months with her cancer and helping out the homeless. Stephanie was annoyed with her and didn't want to hear any of it. Brooke promised that it would never happen again and she'd never betray Ridge. Stephanie began to cry and went into a rage, demanding Brooke to get out. Brooke's eyes began to tear up.