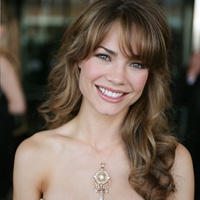 (SoapOperaNetwork.com) — As previously reported, "General Hospital" star Rebecca Herbst (Elizabeth Webber) was fired by the ABC soap in late January due to what was said to be "storyline dictated" reasons, but now Soaps In Depth is reporting that the actress is actually staying. So what's the deal?

After tweeting to their followers earlier today that the actress was staying, In Depth instilled hope into the hearts of Herbst fans who were boycotting the show after they originally learned their favorite actress had been fired. "They’ve been incredibly organized,” said Richard M. Simms, executive editor of the mag in an interview posted on TheTVAddict.com. "A lot of times, fans react and for a few days, it’s all anyone can talk about. But Becky Herbst fans really refused to let this drop. It probably doesn’t help that over the past few years, "GH" has gotten a bad reputation for either sidelining or writing out longtime characters. Things may finally have reached a breaking point with a lot of fans, who just couldn’t accept another legacy character being canned."

An ABC representative was unable to confirm the news to Soap Opera Network.